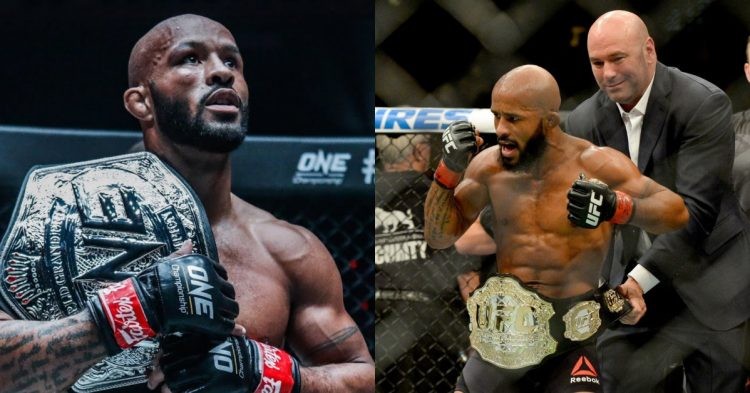 Regarded by many as one of the best Mixed Martial Artists of all time, Demetrious Johnson is a former UFC and ONE Championship Flyweight champ. Following his departure from the UFC in 2018, Johnson is currently a part of the Asia-based MMA organization, One Championship.

Johnson started his MMA career in 2007. He fought Brandon Fieds on his debut and knocked him out to start his journey. Johnson was undefeated in his first 10 fights with 8 finishes and 2 decision wins. Although he lost to Brad Pickett on his WEC debut, Mighty Mouse bounced back with two big wins over Nick Pace and Damacio Page.

Following his unanimous decision victory over Page, Demetrious got into the UFC and defeated Norifumi Yamamoto and Miguel Torres in successive fights. He then got the very first UFC title shot against Dominick Cruz in the bantamweight division in 2011.

However, he was completely dominated by Cruz and decided to move down to the flyweight division. Johnson became the inaugural 125lbs UFC champion at UFC 152 after beating Joseph Benavidez via split decision. He then went on a legendary run which saw him defending the belt 11 times in a row.

However, his title run came to an end with a loss to Henry Cejudo at UFC 227, whom Johnson had beaten previously at UFC 197. Although many thought he won the bout, DJ ultimately lost the fight via a split decision. Instead of chasing after the UFC belt, Johnson chose to explore his options and joined ONE Championship.

DJ made his ONE debut in 2019 against Yuya Wakamatsu. The bout took place in the quarterfinals of the flyweight Grand Prix. He defeated Yuya via submission and followed it up with another unanimous decision win over Tatsumitsu Wada in Semi-Finals. Johnson ultimately became the flyweight champion as he defeated Danny Kingad in the finals of the tournament.

But he lost the belt in the following fight against Adriano Moraes in 2021. Moraes knocked DJ out for the first time in his career. After taking some time off, he returned in 2022 against Rodtang Jitmuangnon for a mixed rules fight. He defeated Rodtang Jitmuangnon via submission in the second round.

How much has Demetrious Johnson earned in his MMA career?

Demetrious Johnson had 3 fights in the ONE Championship’s flyweight division. According to MMA Salaries, he earned $790,000 each for all 3 of his ONE FC fights. While $750,000 was the base salary, DJ earned $40,000 in sponsorships for his three bouts in the Asia-based promotion.