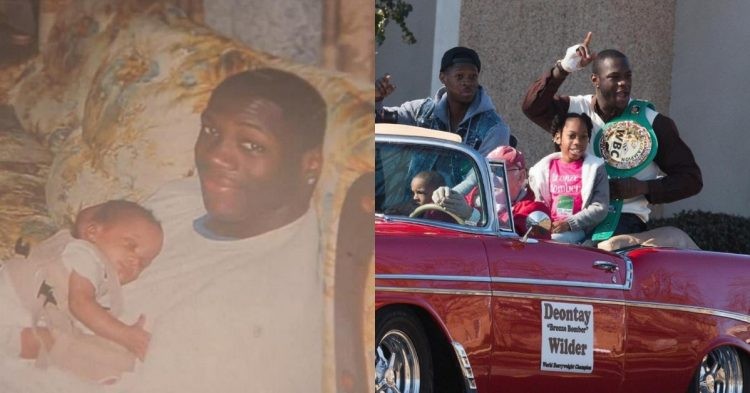 (Images via The Sun)

Deontay Wilder is a former WBC boxing heavyweight champion. He has beaten the likes of Luis Ortiz and Dominic Breazeale. He was also a part of one of the most memorable heavyweight trilogies of all time. From 2018 to 2021, he fought one of the greatest boxers ever, Tyson Fury. Although Wilder lost the series 2-0, he put on a great fight almost every time.

In their last contest on October 9th 2021, Fury won the third fight of the series via an 11th-round knockout. However, Wilder’s stock went up despite losing. Tyson rocked Wilder pretty much right at the beginning of the fight. However, the 36-year-old showed a champion’s heart and came back to drop Fury twice in the fourth round.

It proves the grit and determination that Wilder has inside him. He is famous for his lights-out punching power and it does not matter which round of the fight it is, Deontay is an apex predator who can end the contest with one single strike! However, Wilder never wanted to become a boxer in the first place and did not even pick up a boxing glove until he was 20!

Why did Deontay Wilder choose to become a boxer?

In 2005, Deontay Wilder was only a 20-year-old man who did not know where life was taking him. Although he was into basketball, it was ultimately boxing that Wilder decided to pursue. He did not have any prior experience in the ring. Hence, when he joined the Skyy Boxing Gym, Wilder’s head trainer Jay Deas had a lot of work to do.

But it looks like Deontay is one of the students who starts picking up the lessons very quickly. In the space of two years, Wilder won the National Golden Gloves competition in 2007. His amateur career did not stop there as he went on to win the bronze medal in 2008. It also became the inspiration behind his nickname, ‘The Bronze Bomber.’

But why boxing? Why did Wilder choose boxing instead of any other sport? Wilder revealed that he was inspired by his daughter to start boxing. In 2005, Wilder had his first child with his then-girlfriend Jessica Scales. They had a daughter by the name of Naieya Wilder. She was born with a rare birth defect and to take care of her, Wilder put on boxing gloves.

“I was just a guy in college, was on the basketball team. I’d do it — in terms of getting into boxing — all over if I had to for my daughter. She’s the one that got me into boxing.”

“I was willing to do whatever it took to take care of my child. I promised her that daddy will be a world champion one day and I’ll be able to support her. I made sure I could deliver that promise. She inspired me to change my profession.”(h/t via EssentiallySports)

Deontay Wilder’s first-born was Naieya Wilder, who was born in 2005. Unfortunately, she was born with a birth defect called Spina Bifida. It affects a person’s ability to walk, maintain stability and bowel control. When Wilder found out that he was going to become a father, he stopped pursuing a career in college sports and started doing odd jobs.

However, after his daughter’s condition, Wilder chose to become a boxer to pay the medical bills. Naieya Wilder went through five surgeries to recover from the condition and became a source of inspiration for her father. Wilder previously spoke on what his daughter means to him and how she motivates him to do better in his own career in boxing.

“As a father, it made me proud. She’s definitely like me, she gets everything from me: the strength, the mindset, the ability to not give up… She came from a long place, she came very far from what doctors said she would maybe never be able to do — like walk… But she’s amazing, I’m so proud of my daughter. It allows me to continue to be strong in boxing – it’s like we feed off each other’s strengths… She’s very smart, she’s running around.” (h/t via The Sun)

It looks like the fighting spirit is in the blood of the Wilder family. Just like her father, Naieya Wilder is also a warrior and she never gave up on the fight for her life.