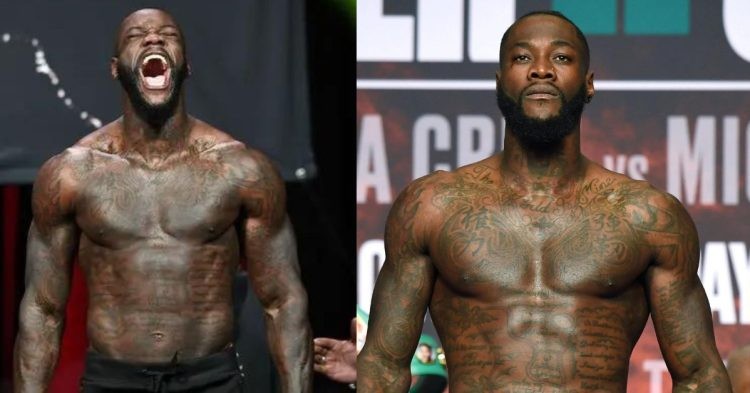 Deontay Wilder is scheduled to make his return to the ring this weekend when he fights Robert Helenius on October 15. However, questions about the American’s weight have been raised in advance of his return.

Under the supervision of his new trainer Malik Scott, Wilder weighed in for his final fight, the trilogy match versus Tyson Fury, at a career-high 238 pounds.

One year later, Wilder is about to make his ring comeback but appears much smaller in the picture. This raises many speculations with regard to how the change might affect his performance inside the weight.

During the weigh-in, it was observed that Wilder had dropped over 23 lbs for his next bout. The same was reported by Michael Bensonn.

📉 Wilder 23½lbs lighter than he was for the Tyson Fury trilogy fight.

The former heavyweight world champion of the WBC asserted that he and his staff had learned from their errors in the previous bout, where they may have become a touch too fixated on being as strong as possible.

Weight classes exist for a reason. However, in the heavyweight division, usually the weight class is not as stringent as compared to other weight classes. That being said, it is rare to see weight difference even in heavyweight bouts over 15lbs.

In this fight, Wilder is around 30lbs lighter than his opponent. Will that play a factor in the fight is something only time can reveal. For all we know, Wilder is hard hitter and possess natural power. Weight may not be issue with regards to power in his hands due to his natural ability.

Additionally, Being lighter will help him be faster and no light on feet. This may result in a very elusive yet powerful form of a boxer which is a desired combination by any boxer.

Not to mention, him being lighter may be a result of better conditioning and being lighter will prevent him from getting tired as quick. Taking all this into consideration,  losing added weight might benefit the boxer. However, all one can do is sit back and see it in the bout.

Alexa Grasso and Yair Rodriguez Dating Rumors- How Did It All Start?