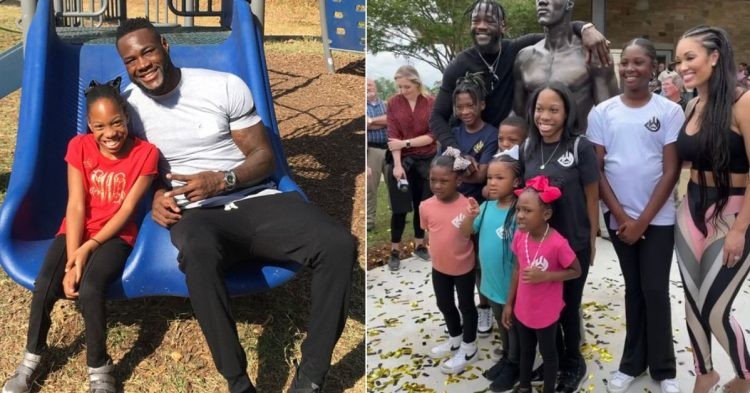 Isn’t being a parent something? Having to take care of your kids and provide for them is a very rewarding experience, and Deontay Wilder well and truly embraces that part of life. Bronze Bomber Deontay Wilder is arguably the fiercest puncher in the sport of boxing today. The former WBC Heavyweight Champion is a family man, and once revealed that he started boxing to provide for his family.

In a recent interaction on the Pivot Podcast, Wilder shared how being a father has changed his perspective on life, giving us a crucial lesson on parenthood.

“It’s about them and everything you do is about them all your decision-making. Just everything you know so as I start having children I start uh pre-thinking about my action because I know if I didn’t if they’re not in my, if I’m not in their life, dude nobody’s getting fed, yeah you know what I’m saying. And I was taught to no matter how many children I had in the world, make sure you be there for your children.” Wilder said on Pivot Podcast.

Being a good parent to his kids came naturally to Deontay Wilder, who had seen his father rise up to every little challenge growing up in Alabama. Even after Wilder’s mother left the family, Wilder’s father took the charge and never made Wilder and his three siblings feel like they had no one. Wilder, who is now a parent to eight kids, just wants to replicate his father.

Deontay Wilder was just 19 when the news broke in that he would be a father to a daughter. While that wasn’t something Wilder wasn’t prepared for, the unfortunate news that his daughter Naieya Wilder would be born with a condition called Spina Bifida ignited a fire inside the Bronze Bomber.

Wilder has opened up about the hardships he faced after the birth of his first child in the past. The Bronze Bomber had to give up on his football dreams to focus on boxing.

Naieya Wilder was born with Spina Bifida but she’s all grown up now and there’s nothing she can’t do. She’s truly a Wilder! #selfies4sb pic.twitter.com/1gZRpEsUuy

And while he would go on to win the Bronze mental for Team USA at the Olympics, it wasn’t until his professional boxing career that he actually earned the attention and recognition he always deserved. At the time, he did several odd jobs to sustain himself and his family. It goes without saying, Deontay Wilder is an inspiration to not just boxing fans around the world, but everybody who is trying to make ends meet to provide for their family.
Tags: BoxingDeontay Wilder
Previous Post