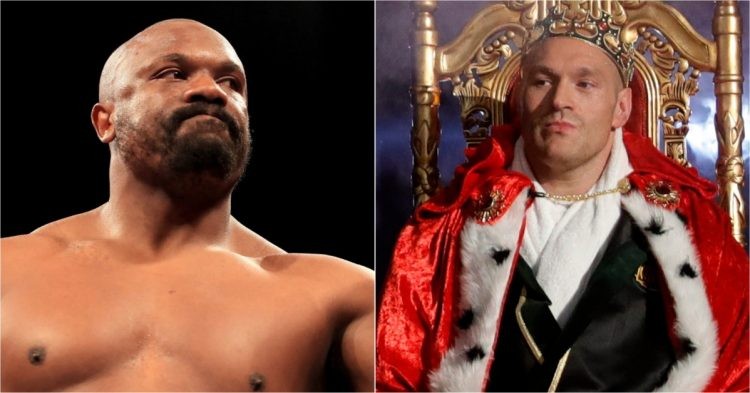 Boxing fans all over the world rejoiced as Tyson Fury announced his return to boxing. After beating Dillian Whyte in April earlier this year, Fury dropped bombshell news and stated his intentions to retire after defending his WBC belt.

Fury did exactly that as he took the mic after the bout to announce his retirement from the sport. Although there was interest in a cross-promotion fight against Francis Ngannou, Fury seemingly walked away from fighting serious contenders.

However, that was not the only time when Fury told the world that he would retire. He did so previously as well and came back. Regardless of how much money he has or how many titles he has won, Tyson Fury is a true competitor inside and he could not stay away from the ring too long. First, he wanted to fight Anthony Joshua in a mega showdown.

But, that ultimately did not happen, as negotiations between Fury and AJ’s promoter Eddie Hearn broke down. Instead of waiting around, he decided to defend the WBC belt once more. His next opponent is going to be Derek Chisora and it will be the third showdown between the two fighters. Fury won the previous two fights comfortably and will be a favorite to win the trilogy bout as well.

The landscape of the heavyweight division is always changing…

Tyson Fury will have the height and reach advantage heading into this third fight. While Fury is coming off big wins against the likes of Dillian Whyte and Deontay Wilder, Chisora has lost 3 of his last 4 bouts. So Tyson should rack up another easy win this Saturday. The bout will take place in front of a packed crowd in the Tottenham Hotspur Stadium.

Ahead of his third fight against Derek Chisora, let’s take a look at some of the songs he has used for his walkout in some of his biggest fights. In his last few bouts, fans have seen Fury’s personality come through and his walkout songs created a mesmerizing atmosphere in the arena. So let’s check out some of the most memorable walkouts of his career.

Ahead of fighting Wladimir Klitschko, Tyson Fury had a record of 24-0. Although he was already an established fighter, he needed a big name in his resume to give him legendary status. Hence, the bout against Klitschko was crucial for his career. For this fight, Fury chose the song, “I’m Gonna Have a Little Talk” by Randy Travis.

The bout went the full distance and Fury won the fight via unanimous decision. Tyson won the WBA (Super), IBF, WBO, IBO, and The Ring heavyweight belts. It also proved to the fans that Fury was indeed an elite fighter.

Deontay Wilder vs Tyson Fury 1: “Freed From Desire” by GALA

After beating Wladimir Klitschko, Fury took 3 years off from boxing and he came back to action against Sefer Seferi. For the Seferi fight, Tyson used a medley of three songs. The songs were, “Without Me” by Eminem, “Because I Got High” by Afroman, and “Return of the Mack” by Mark Morrison.

Fury beat Seferi and followed up with another win against Francesco Pianeta. However, his real challenge was going to be against Deontay Wilder, whom he faced for the first time on December 2018.

For the bout, he chose “Freed From Desire” by GALA. The bout turned out to be everything that one would hope for. From dramatic knockdowns to impeccable boxing skills, the contest will go down as one of the best in the heavyweight division. The bout ended in a split-decision draw.

Deontany Wilder vs Tyson Fury 2: “Crazy” by Patsy Cline and The Jordanaires

After the first fight, Fury did not rush into the rematch. Instead, Fury had two great bouts against Tom Schwarz and Otto Wallin. Fury had a tough go of it against Wallin, who certainly gave Tyson a run for his money. However, that prepared Fury for his second bout against Wilder.

Fury chose to walk out with the song, “Crazy” by Patsy Cline and The Jordanaires, playing in the background. Fury also changed his coach Ben Davison and opted to work with Sugarhill Steward for the Wilder rematch. It paid its dividends as Fury won the bout via 7th round TKO.

Tyson Fury vs Deontay Wilder 3: “You Shook Me All Night Long” by AC/DC

After the second bout in 2020, Tyson Fury’s last encounter with Deontay Wilder took place in October 2021. It was perhaps the best bout in their series of fights. Although Tyson won the bout, Wilder secured two huge knockdowns in the fight and put the result in doubt.

Even before the fight started, The Gypsy king riled up the crowd and came out to “You Shook Me All Night Long” by AC/DC. The song is the epitome of rock and roll and the crowd was on fire throughout the night.

Tyson Fury vs Dillian Whyte: “Juicy” by The Notorious B.I.G and “Sex on Fire” by Kings of Leon

Tyson Fury’s last fight was against Dillian Whyte inside Wembley Stadium. The crowd was eagerly waiting to see one of the best fighters in action. Fury and Whyte’s entrance songs did not disappoint. The champ walked out to a medley of “Juicy” by The Notorious B.I.G and “Sex on Fire” by Kings of Leon.

Fury was also on fire during the bout as he did not even let Dillian Whyte land any meaningful punches. After toying with Whyte, the 34-year-old knocked out Dillian in the 6th round of the bout.

For the much-anticipated trilogy fight against Derek Chisora in London, The Gypsy King walked out to the Peaky Blinders theme song/ Red Right Hand by Nick Cave & The Bad Seeds. Fury followed it up with Three Lions (Football’s Coming Home), and Mr. Brightside by The Killers was the last song on Fury’s list as he made his walk to the ring.

Although Derek Chisora has some significant wins in his career, he has not lived up to his potential. Fans had high hopes for the fighter to become one of the best in the world, but Derek has not been the most consistent fighter in the world. However, he has had some big fights in his career. So which songs did he choose for some of his biggest career fights? Let’s take a look at them.

Kubrat Pulev vs Derek Chisora 2: “You Were Always on My Mind” by Elvis Presley

Kubrat Pulev and Derek Chisora previously crossed paths in May 2016. After having a great 12-round bout, the judges scored the bout for Pulev. However, they rematch earlier this year after almost 6 years of their initial fight. But, this time, Pulev managed to win the bout. However, it was also a split decision.

It is the last fight on his record and he chose a great song for the fight. Derek walked out to “You Were Always on My Mind” by Elvis Presley. The fans absolutely loved it and the O2 Arena was buzzing with the entrance.

Derek Chisora and David Haye fought each other in 2012. At the time Chisora was coming off some big losses against Tyson Fury, Robert Helenius, and Vitali Klitschko. But the fans were excited to see two British heavyweight fighters take on each other.

The bout went only 5 rounds and Haye won the bout via TKO. However, the ring entrances for the fight were absolutely elite. While Chisora used the theme music for Gladiator and Haye walked out to “Ain’t no Stoppin’ Us Now” by McFadden & Whitehead. Derek also dressed up for the occasion to elevate the moment.

Derek Chisora faced Dillian Whyte twice in his career. Their first fight came in 2016 and the result was very disputed. Like many of his losses, this fight also went the full distance and Chisora lost the bout via split decision. But many fans thought he won the fight.

Del Boy walked out to the legendary Eagles song “Hotel California.” It is not the most upbeat song and however, but it certainly sets a mood that replicates the sense of calm before the storm.

Derek Chisora vs Vital Klitschko went down on 18th February 2012. For this fight, the 38-year-old wanted to pick the “Only Fools and Horses” theme song. However, Vitali turned down the request and it made Chisora say that Vitali was trying to mess with his concentration.

Derek Chisora paid tribute to Chadwick Boseman as he walked out to Wakanda by Ludwig Goransson for the much-anticipated trilogy fight against Tyson Fury. As Chisora made his way to the ring, Zimbabwe by Bob Marley reverberated inside the Tottenham Hotspur Stadium.