How Many Times Has Derrick Lewis Lost in His MMA Career? 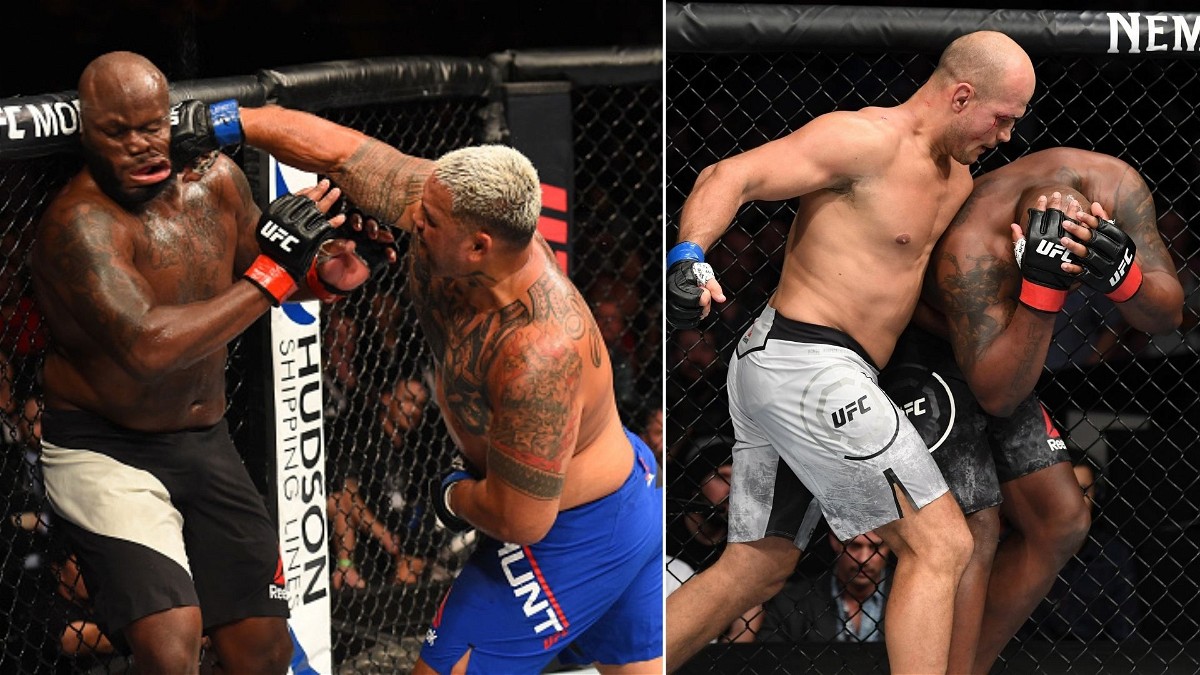 It’s not many times that you see a knockout artist get slept inside the Octagon. However, in the sport of fighting, nothing is impossible. One of the most devastating punchers in the history of the UFC, and one of the most successful heavyweight contenders Derrick Lewis, has had hir fair share of ups and downs in his illustrious MMA career.

Derrick Lewis suffered the first KO loss of his UFC career against Matt Mitrione back at UFC Fight Night in September of 2014. Lewis has been submitted only once inside the Octagon, which came against Daniel Cormier back at UFC 230 for the UFC’s heavyweight championship.

Lewis suffered the first loss of his MMA career against Shawn Jordan at Cajun Fighting Championships: Full Force back in June of 2010 via unanimous decision. Both the fighter would go on to share the Octagon once again inside the UFC Octagon after five years.

Tony Johnson in his sole appearance for Bellator back in June of 2011. He would remain undefeated for his next eight MMA bouts before losing a

Here’s taking a look at all of Derrick Lewis’ losses inside the UFC Octagon over the years.

Early in his UFC career, Derrick Lewis took on knockout artist Matt Mitrione in his third fight for the American promotion. Needless to say, the fight was quoted to be a barn-burner from the let go, and that’s what happened as the fight lasted barely 41 seconds.

Both Lewis and Mitrione came into the fight as vicious knockout artists, however, when the time came, it was experienced Matt Mitrione who got the better of the Black Beast with a vicious forearm, followed by a barrage of punches during the first exchange between both the fighter. While Lewis did not look too pleased with the stoppage, it’s safe to say that there were enough unanswered shots to warrant a stoppage loss. The bout marked Lewis’ first knockout loss.

Once again, Derrick Lewis was matched up with a vicious knockout artist and former opponent in the form of Shawn Jordan. Coming off an incredible knockout win over Viktor Pesta, Lewis looked in a great position to secure his second straight win inside the UFC.

However, that wasn’t the case as a brutal heal kick rocked Lewis in the first minute of the second round. It was a matter of seconds before a barrage of punches from the mount position by Shawn Jordan forced the referee to step in and end the fight.

Mark Hunt finishes Lewis in a Fight of the Night performance

Derrick Lewis vs Mark Hunt squared off against each other in a five-round main-event in a UFC Fight Night back in June of 2011. Lewis, at the time, was riding on a six-fight win streak. In what was an exciting fight, Hunt got the better of Lewis, as he stopped the Black Beast in the fourth round to emerge victorious among the thousands who had come down to witness Hunt vs Lewis at Spark Arena, in Auckland.

It was the second five-round fight for Lewis and the second time that he had entered the fourth round. Hunt’s constant pressure and his ability to take shots proved to be too much for Lewis, who looked visibly tired in the third round. Hunt immediately starts digging for the body, as a tired Lewis swung for the fences.

After everything was said and done, it was a patient and more experienced Mark Hunt who emerged victorious against a very dangerous Derrick Lewis who almost gave up in the face of fatigue and an advancing Mark Hunt who looked absolutely brilliant on the night of the fight.

After securing three straight wins following the loss against Mark Hunt, Derrick Lewis earned the shot at the title belt against Daniel Cormier at UFC 230. The blueprint to beating Derrick Lewis had already been laid out. It wasn’t a secret that Lewis’ takedown defense was weak, and going against a seasoned wrestler like Daniel Cormier, it was bound to be a challenge to defend those takedowns.

However, Lewis failed miserably at the job as Daniel Cormier completely dominated the knockout artist, eventually submitting him in the second round to defend his heavyweight title.

Junior dos Santos in his prime was a crafty striker. He had the amazing quickness for a heavyweight and knockout power that had already seen him finish the likes of Cain Velasquez, Stipe Miocic, Frank Mir, among others. So when Lewis and Junior dos Santos, it was expected to be a barn burner, and rightfully so. While the fight lasted a little over two rounds, both Lewis and dos Santos had their moments.

dos Santos rocked Lewis with an overhand early in the first round, however, a right hand from Lewis wobbled the former heavyweight champion, who bolted back to the safe space.

Be that as it may, it wasn’t a punch, but a kick right to the gut of Lewis that changed the course of the fight. Needless to say, Lewis was hugely compromised going into the second round, and Junior dos Santos leveled it up with a beautiful one-two, followed by a barrage of punches, and vicious uppercuts that rocked Lewis, wobbling him down on the canvas.

Derrick Lewis hasn’t lost many, and the ones he has have come against some of the greatest mixed martial artists of the time. Whose performance do you think was the best against the Black Beast?

Following his loss to JDS, Derrick Lewis went on a marvellous run of 4 fight win-streak. He defeated tough opponents such as Alexey Oleynik, Curtis Blaydes, Illir Latifi and Blagoy Ivanov. It led to him being next in line for champion Francis Ngannou’s title next. However, Ngannou could not fight at that time and UFC booked the interim title fight between Ciryl Gane and Lewis.

The fight was scheduled to take place in Lewis’ home state of Texas. However, the pressure of the fight got to the ‘Black Beast’ and he perished to Gane in the third round of the fight. The French fighter finished Derrick at 4:11 of the third round.

This is the last career loss of Derrick Lewis. Similar to his last fight, Lewis once again falls prey to Huston, Texas. He was the betting favourite coming into the fight and was expected to make short work of his opponent.

However, it was not meant to be as Tai Tuivasa absolutely flatlined the Texan. Although Lewis had decent success in the first round of the fight, he ultimately paid the price of being careless. A vicious elbow made him drop face-first onto the canvas.

Also Read: Why Did Derrick Lewis Go To Jail?

The Hilarious Story Behind Derrick Lewis and Ronda Rousey