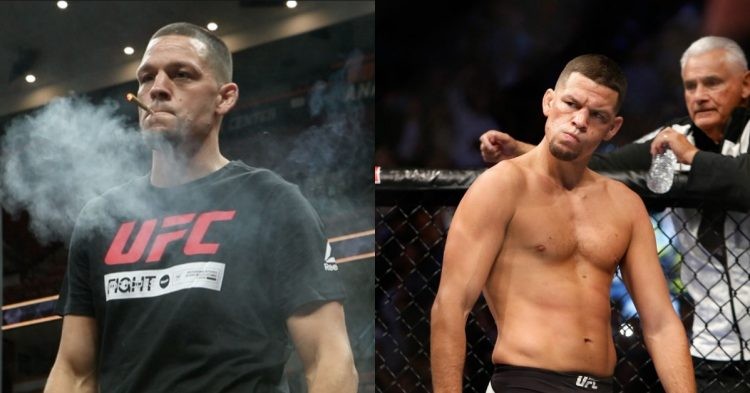 Nate Diaz is one of the biggest stars in the history of the Ultimate Fight Championship (UFC). Although he has been a part of the company since June of 2007. Prior to that, Nate fought in the promotions such as WEC, Strikeforce and Pancrase. He became a part of The Ultimate Fighter season 5 after losing to Hermes Franca at WEC 24.

Although Nate did have several win streaks afterwards, he never really regained his momentum. He traded wins and losses since 2009. Nate fought for the UFC championship only once and it was against Benson Henderson. But it ended in a unanimous decision loss to Henderson. He then suffered the very first TKO loss of his career to Josh Thomson in 2013.

But Nate’s faltering career was revived after he took a year off following his loss to Rafael Dos Anjos in 2014. He returned against Michael Johnson in 2015. However, the UFC landscape had completely changed in Nate’s absence with the arrival of a certain Irishman.

How did Nate Diaz become of the biggest stars in the UFC?

Between 2014 to 2015, Conor McGregor ascended the corporate ladder and became the biggest star in the company. McGregor had become the golden goose for the UFC and with no credible challenge in sight. The biggest moment of McGregor’s UFC career at that point was the 13-second knockout of Jose Aldo at UFC 194 to win the 145lbs championship.

But little did he know that his unbeaten streak was about to come to an end. After beating Michael Johnson, Nate Diaz issued probably the most memorable call-out in UFC history. The profanity-filled call-out certainly caught the UFC and Conor McGregor’s attention. After the lightweight championship fight against Rafael Dos Anjos fell through, Nate got the call to fight Conor.

The younger Diaz brother was a +350 underdog heading into the fight. The first few moments of the contest showed exactly why he was the underdog. Conor landed heavy shots on Nate which bloodied him up badly. However, Conor gassed out in the second round. Although he was the featherweight champ and this particular fight was at welterweight.

Nate took advantage of that and choked Conor out in round 2 of the fight. With that win, Diaz shocked the entire world and took away Conor’s aura of invincibility. Just like his call-out, Nate’s post-fight interview with Joe Rogan will also go down in the history of the sport as one of the most memorable ones. It turned Nate into a massive star overnight and opened up a lot of commercial opportunities.

From going on late-night television shows to signing endorsement deals, Nate became a bonafide star. Although he lost the immediate rematch against Conor, the fight was a very competitive one and many fans thought Nate won the second bout against Conor as well.

But Nate went on a long hiatus following his loss to Conor in 2016. However, this break did not have the same positive impact on his career as the last one had. Although he defeated Anthony Pettis on his return at UFC 241, he suffered two back-to-back losses to Jorge Masvidal and Leon Edwards at UFC 244 and UFC 263 respectively.

What are some of Nate’s biggest wins of his UFC career?

If we take a look at Nate Diaz’s losses since April of 2011, he has either lost to current/former champions like Benson Henderson, Rafael Dos Anjos and Conor McGregor, or title contenders like Rory MacDonald, Jorge Masvidal and Leon Edwards. The only other opponent to beat him is Josh Thomson.

While Josh did not fight a UFC belt, he was champion at Strikeforce which the UFC inherited after their purchase of the company.

On the other hand, In terms of wins, Nate has beaten two UFC champs in his career, Anthony Pettis and Conor McGregor. He also holds significant wins over Gray Maynard, Donald Cerrone, Josh Neer, Jim Miller, Melvin Guillard and Takanori Gomi. His submission win over Gomi will always remain a highlight of his career because of the way Nate finished the fight.

Hence Nate certainly has a resume that holds up pretty well despite being an active fighter since 2004. There certainly is an argument to be made for Nate being the best fighter to not win a UFC championship. However, Tony Ferguson will also be a part of the conversation. But in terms of PPV sales, Nate outshines Tony in a big way.

His two fights against McGregor at UFC 196 and UFC 202  sold more than 3 million PPVs combined. Nate is one of the most marketable fighters in the UFC. To quote UFC president Dana White, Nate was in fact a “niddle-mover.”

Aside from being the ultimate fighter winner, Nate has also won 15 post-fight bonuses throughout his UFC run. Nate’s influence was so big that the company even made a BMF belt in honour of the 37-year-old. The bout which took place at UFC 244, headlined Madison Square Garden in 2019.

Although he fought for the UFC championship only once, that can be attributed to Nate’s constant bickering with the company. If he had played ball similar to someone like Daniel Cormier, Nate’s entire career may have had a different outlook. But his personality is what made him a star to his fans. Hence, Nate does not have any regrets about how his run in the UFC turned out to be.

How many PPVs did Nate Diaz sell in the UFC?

As mentioned above, Nate Diaz had 3 big main event fights in the UFC. He main evented UFC 196, UFC 202 and UFC 244. He also had two co-main event spots at UFC 241 and UFC 263. Although the Leon Edwards fight was not technically the co-main, it was the very first 5 round undercard fight in the UFC. So it did have a significant contribution to the PPV.

According to Bloody Elbow, his first fight with Conor McGregor at UFC 196 sold 1.5 million PPVs. But the rematch was even bigger and according to GiveMeSport, it sold 1.65 million PPVs. As for his fight against Masvidal at UFC 244, there are no official figures on the PPV buys. But judging by the trends, it did very well indeed.

What is Nate Diaz’s record in the UFC?

Throughout his 18-year career so far, Nate Diaz has had 33 fights in his Mixed Martial Arts (MMA) journey. Before joining the UFC, Nate had a record of 5-2. Since then, however, Diaz has had 26 fights in the promotion.

In his UFC career so far, Nate has had 15 wins and 11 losses. Although the record does seem deceptive, the majority of his wins and losses came against the elite of the division, both at lightweight and welterweight.

Has Nate Diaz ever fought for a UFC title?

As discussed above, Nate did fight for the UFC lightweight belt in 2012. However, the bout did not take place on a PPV. At that time, the lightweight division was not as stacked with stars as it is now. Hence, the UFC decided to put the bout as the main event of a Fight Night card on Fox Network.

The number seems very below par for Nate’s standards. Not only that, but Benson also secured 8 takedowns in the fight as opposed to Diaz’s zero successful takedowns.