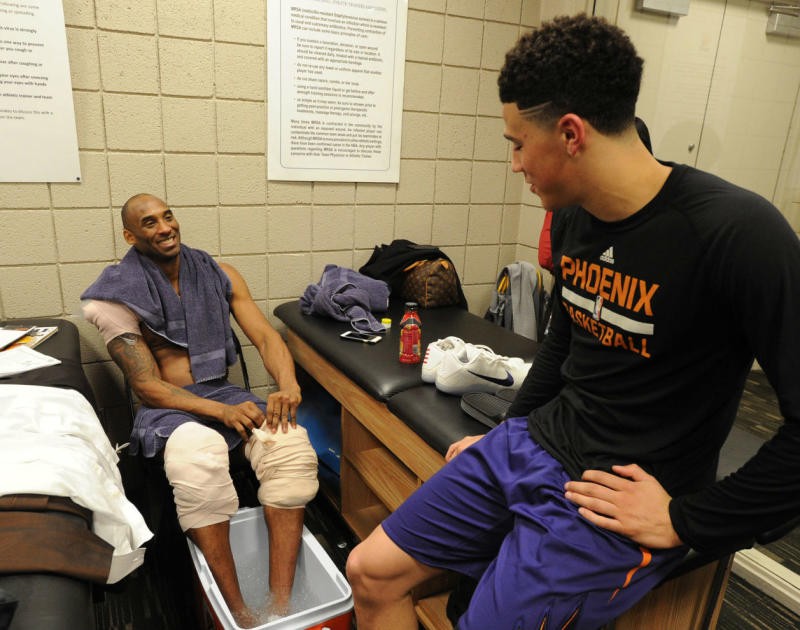 Devin Booker and his Phoenix Suns are playing the Milwaukee Bucks in the 2021 NBA Finals. 5 games in and the Suns are down 3-2. They were up 2-0 after the first 2 games but then let the Milwaukee Bucks go on a 3 Game Win streak. Now they play in Game 6 with a must-win mentality or they will see their season end.

Devin Booker is averaging 30 points per game in the NBA Finals and 27 points in the playoffs. This is his first playoff appearance and he has show how elite he is through all the rounds.

His elite play has helped him draw comparisons to his Idol Kobe Bryant.

But how does Devin Booker feel about these comparisons?

What did Devin Booker Say?

Devin Booker idolizes Kobe Bryant. He has a tattoo of an iconic line Kobe told Booker. He has all the Kobe gear and you can really see his affinity to the Black Mamba. Not only that but he has also a offensive game that is similar to an older Kobe Bryant. A Kobe which Booker grew up watching.

But when Devin Booker heard all the comparisons between him and Kobe he said,

“I should never be compared to Kobe Bryant.”

"I should never be compared to Kobe Bryant."

Devin says this obviously because he knows he has not achieved the things Kobe has, especially at this point in his career. But in general they aren’t comparable.

Booker possesses the offensive game of Kobe but an older one. However, he does not have the athletic ability of a young Afro-Be. Kobe was a dunk champion and Zach Lavine is more similar to that version of Kobe. Bryant was also a 12 time All-defensive player. Booker is not as good as a defender as KB was, at least right now. He could develop it later. Jaylen Brown of the Boston Celtics is more similar to Kobe in that aspect.

With just one portion of the game the comparison’s are unwarranted. However, the Phoenix Suns would really wish if Devin turns into a prime Kobe in game 6 and 7 to help the Suns win the NBA title.

Also Read: Space Jam 2 Review: Even LeBron James Could Not Save this Overstuffed Sequel