by Tepi Jini
in Boxing
0 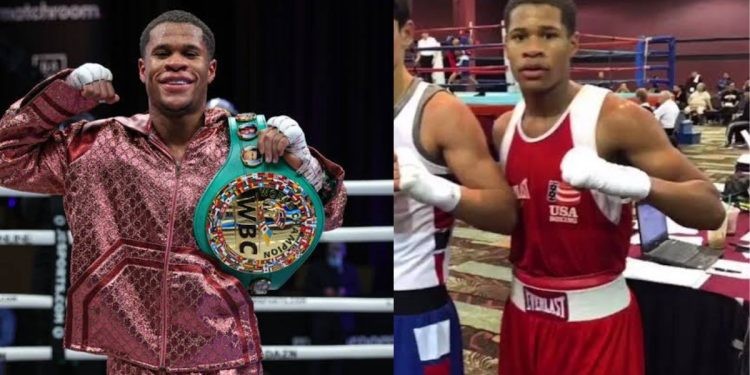 Devin Haney is all set to face George Kambosos Jr, in a title unification bout this weekend, June 5th.

The young champion turned pro in 2015, at the age of 17, after winning seven National titles but could not compete in America due to the age restriction issues. As a result, he competed in Mexico for the first year of his pro boxing career.

His scores only got bigger when he won the interim WBC lightweight title in 2019, against Antonio Moran and was later promoted to become the champion.

At the young age of 23, Haney has a phenomenal record of 27-0-0. Over the course of his young and illustrious career, Haney has managed to grab the attention of boxing fans around the world. As it stands, he is currently one of the most popular boxers in the world today.

Devin Haney had an amateur record of 138–8, before turning professional.

He won seven National titles as an amateur. In 2015, he became the youngest boxer to win the Youth World Championships in Reno, at the age of 17.

Haney was awarded the Silver medal in USA Junior National Championship, in 2013.

Haney paved his way to the quarter-finals of the World Junior Championship, held in Kyiv, Ukraine in 2013.

In 2014, Haney won the US Junior National Championships in Reno where he defeated Adolfo Alanis and Alejandro Campa, both, in all three rounds.

Out of the eight losses in his amateur boxing career, Haney has dropped losses twice to Ryan Garcia. Both the boxers have competed against each other four times in their amateur career with a head-to-head record of 2-2. Needless to say, with both the boxers now at the top of the lightweight division in professional boxing; a showdown between the both inside the boxing ring is going to be one for the ages.

George Kambosos Jr vs Teofimo Lopez Fight Purse: How Much Did Kambosos and Lopez Earn for Their Undisputed Title Clash