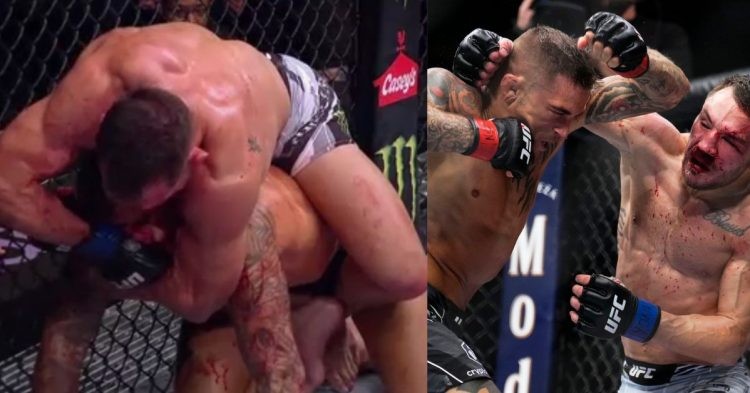 One of the most stacked cards of the year, UFC 281 took place at Madison Square Garden. The PPV featured two title fights. However, fans were eagerly waiting for the lightweight bout between Dustin Poirier and Michael Chandler.

Israel Adesanya was scheduled to defend his middleweight title against Alex Pereira in one of the most anticipated fights of the year. However, fans were more excited about the people’s co-main event between the former interim lightweight champion, Dustin Poirier and the former Bellator champion, Michael Chandler.

Both Poirier and Chandler are two of the most exciting fighters in the UFC right now. And the fight at UFC 281 was guaranteed to be a barn burner. Well, the fans at Madison Square Garden were not disappointed as both the lightweights put on an incredible show for the fans.

It was certainly one of the best fights of the year. In the first round, the majority of the fight was a striking battle. And both Poirier and Chandler had their moments. But, it was The Diamond who had Chandler hurt badly at the end of the round.

Chandler certainly got Dustin Poirier hurt badly in round 1. However, Chandler’s accuracy was off and he could not capitalise on the opportunity to finish Dustin Poirier.

In round 3, Chandler was exhausted and Dustin Poirier secured the submission win to get back on the winning streak.

After the fight, Dustin Poirier complained about Michael Chandler using a dirty trick to get a rear naked choke in the round 2. Chandler used a fish hook and tried to get the neck of Poirier during the grappling exchanges in round 2.

Even if Dustin Poirier complained to the referee about it, Chandler allegedly did not stop his attempt to secure Poirier’s neck the wrong way. Even Joe Rogan and Daniel Cormier agreed with Poirier’s accusations. Joe Rogan said that Chandler certainly used the fish hook to secure a submission in round 2.

It’s very unlikely that Chandler will get a lot of backlash for these actions after such an incredible fight. Dustin Poirier even buried the hatchet with Michael Chandler after the fight and showed good sportsmanship.