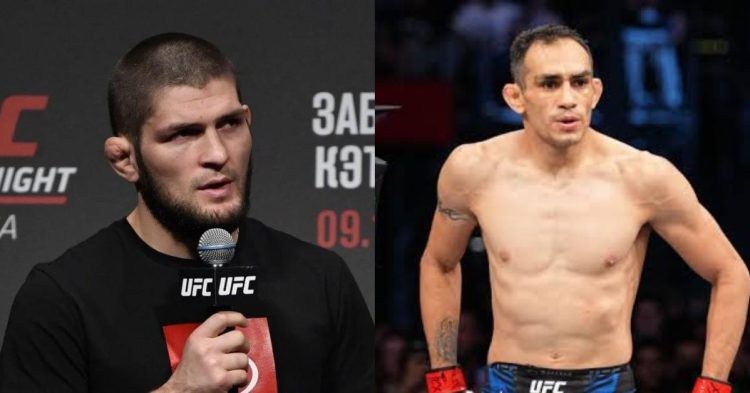 Tony Ferguson had called out Khabib Nurmagomedov for a fight at TUF two months ago and the Russian lightweight liked this idea of coaching and agreed to fight him. Ever since their verbal agreement to face each other inside the octagon, the two rivals have been exchanging words on Twitter.

A few hours ago, El Cucuy asked Khabib to stop running away and sign the TUF contract on Twitter. It looked as if these two lightweights were finally set to collide against each other after several failed attempts as the UFC was interested to get this deal done.

Hey Fathead @TeamKhabib Ya’ Done Bidge Eatin’ That Tiramisu Yet?! You Run Your Mouth More Than A Treadmill 🏃‍♂️💨🍃 Quit’cha Bitchin’ & Sign On The Dotted Line So I Can Outwork🏋️‍♂️Ya Again 29-1 🍮 -Champ 🪄-CSO- 🇺🇸🏆🇲🇽 # WhatAEunic 🤦‍♂️ pic.twitter.com/deO16oYipx

However, it seems like The Eagle dismissed El Cucuy’s callout by posting a gif which indicated that he is not interested to fight Tony Ferguson. It is needless to say that Khabib declining the UFC’s offer has disappointed fight fans as everyone was looking forward to seeing these two elite fighters fight each other.

Ferguson is yet to reply to Khabib declining the UFC’s offer. But one can expect El Cucuy to trash the Russian lightweight for backing out from their verbal agreement to fight each other previously. With Khabib showing no interest and taking a complete turn, the UFC will now need to find a new opponent for Tony Ferguson as he wants to get back inside the octagon as soon as possible.

Many fans were against the idea that Khabib Nurmagomedov should not come out of retirement to fight Tony Ferguson now given El Cucuy’s recent form. With no wins in his last four fights, it doesn’t make sense to pit them against each other.

Several fight experts and analysts were suggesting that if there is anyone who Khabib should fight then it should be Charles Oliveira if he ends up defeating Islam Makhachev. However, UFC President Dana White isn’t against the idea of Tony vs Khabib at The Ultimate Fighter.

In a recent interview with Spinning Backfist MMA, he was open to scheduling a fight between the two lightweight rivals as he liked the idea of Khabib and Tony coaching fighters. However, it looks like the rumours of this matchup being cursed are true because of a change in heart in Khabib’s mind.