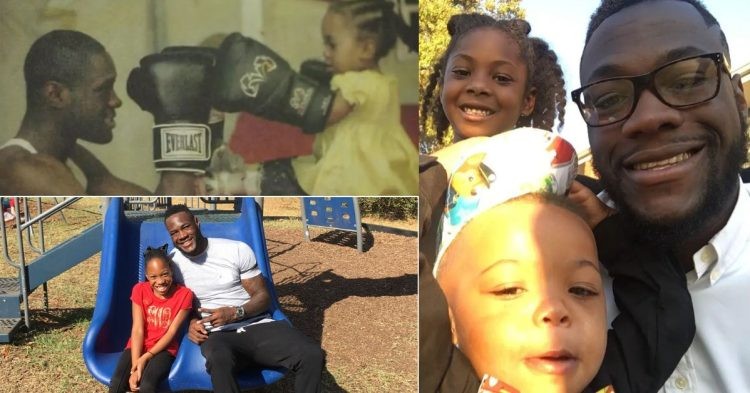 Deontay Wilder with his kids

Deontay Wilder’s eldest daughter Naieya Wilder is the sole reason why the Bronze Bomber is where he is at today.

Former boxing heavyweight world champion, former US Olympic Bronze medalist, US National champion, and one of the most impactful and fiercest punchers in the history of boxing, Deontay Wilder has already established himself as one of the greatest boxers of all time. Wilder’s inspiration? His kids and his family!

It’s been quite a journey for Deontay Wilder. Before he became the boxing world champion and earned the accolades and recognition he always deserved, Wilder used to work at a restaurant, flipping pancakes to make ends meet. Wilder was just 19 years old when he realized he was going to be a father.

However, there was one problem. At the most important juncture of his life, a “scared” Wilder had no idea what it meant to be a father and raise a kid. Moreover, after doctors informed him that his newborn daughter Naieya Wilder was suffering from Spina Bifida.

“It had been scary first off to know I had a child on the way. It was even scarier that this tiny being would be coming into the world with a defect.”

“I was so young, holding my whole world in my hands. Suddenly I was facing this huge responsibility for a life which would need my enormous care and attention.” Wilder said in a conversation with the Daily Mail.

Wilder was even put in a situation where the Doctors left the option of terminating the baby open to him and his wife at the time, Helen Duncan. Wilder decided to raise the baby instead, and after all these years, Naieya Wilder lives a perfectly healthy life.

“The doctors told us she would never walk. Told us maybe she would never have a child’s natural ability for learning. They offered us the opportunity to terminate.” Wilder said.

“This was the most important decision of my life. To keep her or not to keep her. Thank God I got it right. We just felt she had a right to live.” He added.

What is Spina Bifida? – The disease Deontay Wilder’s daughter Naieya Wilder suffers from since she was born

Spina Bifida is a birth defect that occurs when the spine and spinal cord don’t form, leading to movement problems and learning disabilities.

Deontay Wilder’s daughter Naieya Wilder was born with Spina Bifida. She was born on March 20, 2005. All these years later, Naieya lives a life that has not eluded her from doing anything she desires, making Wilder a proud parent. Back in 2016, the Bronze Bomber took to social media to address how far he and his daughter have come since then.

“Doctors can do all that studying and acquire all that knowledge.” “But what they cannot account for is a miracle. The miracle that is our Naieya.”

“She’s not just walking, she’s running. She’s not only going to school, she’s one of smartest girls in her class. So clever. So intelligent.”

“The experience with her matured me early. Seeing her overcome adversity so many times inspired me to do the same.”

Just three years after Naieya Wilder was born, Deontay Wilde made his professional boxing debut, taking on Ethan Cox in his debut fight. He won the bout via TKO in the second round. Wilder would go on to secure 42 straight victories, becoming the WBC heavyweight champion of the world. Wilder’s first loss came in the form of a stoppage loss against Tyson Fury back in February 2020.

Naieya Wilder has proved to be Deontay Wilder’s motivation, and the former boxing heavyweight world champion continues to inspire millions around the world.