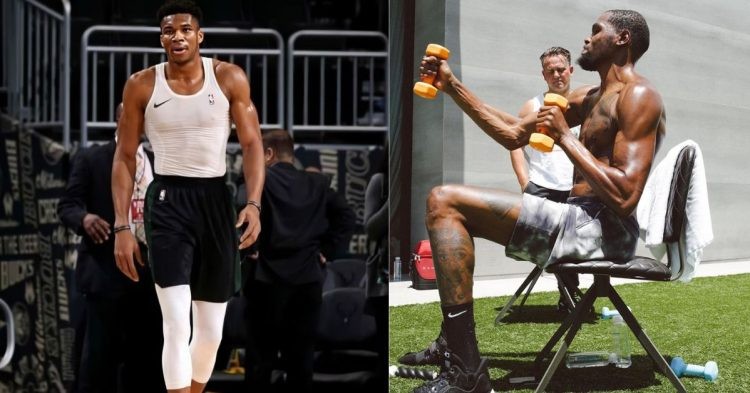 The NBA is filled with freak athletes and players of varying sizes. The most skilled ones are considered “Unicorns” due to their unreal ability despite their supernatural size. Brooklyn Nets star Kevin Durant is one such player. We are all familiar that KD has an extraordinary skillset for a player his size. He is officially listed at 6’10 and weighs 240 lbs.

One must wonder how much truth there is to these claims surrounding his height and weight. After all, there are pictures on the internet that prove KD appears to be just as big as a 7-foot center like Demarcus Cousins. Moreover, he has admitted to pretending to be shorter at 6’9 because he “liked the way that sounded”.

Since we have already been misinformed about Durant’s height in the past, this begs the question of his weight. Durant has been listed at 240lbs or 108 Kg. We should compare him to an NBA player with a similar build to draw solid conclusions.

Most NBA fans remember how thin or skinny Giannis Antetokounmpo looked when he first entered the NBA in 2013. However, he has gone through an epic physical transformation and put on serious muscle mass and size over the past few years. That clearly made a large difference as the Greek Freak soon went on to establish himself as a dominant force in the league. He won his first NBA title with the Milwaukee Bucks in 2021.

How are KD and Giannis the same weight 👀 pic.twitter.com/iTqtyGrlKH

Not many can claim that Durant and Antetokounmpo have similar builds in current times. After Giannis’s transformation, one would assume he has 20 or 30 lbs over KD. Be that as it may, Antetokounmpo is listed at 242 lbs in comparison to KD’s 240.

If you are wondering how this is possible, according to some experts it has to do with how Durant’s weight is distributed across his body. Perhaps, most of his weight is present in his midsection as opposed to being spread throughout his whole frame. This is one of the many theories made to explain how both players are in the same weight class but have very different frames.  Another theory by NBA fans is that the numbers are actually random and NBA players don’t usually get remeasured. Whatever the case may be, we can say Durant has managed to tussle with more muscular players in the NBA for years now and that is all he needs to know in order to feel good about himself.
Tags: Giannis AntetokounmpoKevin DurantNBA
Previous Post