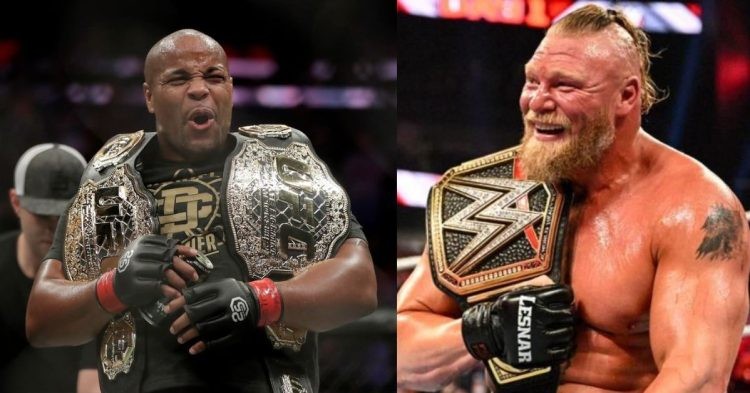 Cormier confirmed the news with his latest Instagram post where he assured fans that he will be fair, honest and impartial to the task he has been called in for.

We don’t yet know if this collaboration is a one-time thing or whether Cormier is going to be involved in the WWE for a long time. But one thing that has caught fire after this news is Cormier’s possible matchup with the former UFC Heavyweight champ Brock Lesnar. We all remember the famous confrontation both of them had inside the octagon at UFC 226. Cormier had just knocked out the heavyweight champion Stipe Miocic inside one round to get a second belt on his shoulder. Then out of nowhere, he called out Lesnar in his post-fight interview which started a verbal and physical altercation between the two. Take a look at it below.

That was one of the best fight promos UFC has ever gotten, was it pre-planned or spontaneous is something we don’t know till date, but the fans loved the animosity between the two and hence Cormier defending his heavyweight title against Brock Lesnar was almost certain. Months passed but that fight never materialized. Cormier fought Derrick Lewis and Stipe Miocic twice before calling it a career after suffering a unanimous decision loss to Miocic at UFC 252. When UFC President Dana White was asked why the super fight between DC and Brock never happened he said that the pro wrestling star and former UFC champ got a better offer to stay with the WWE.

While most of the fans appreciated Cormier for finally making it into WWE, some were quick to speculate a potential match-up between DC and Brock Lesnar.

Don’t be surprised if we see Brock Lesnar vs. Daniel Cormier.

At Wrestlemania in LA next year…

DC is officially in the WWE system and Brock Lesnar has no clear opponent for Mania. pic.twitter.com/CwZzwXa6LN

DCs back cant handle any wrestling.
not too mention he is super overweight right now.

uh no? they’re not gonna have lesnar vs. dc and reigns vs. logan paul on the same card lmao.

The stories already there they just might have this planned

should be program with Lashley that starts building at the rumble, not Cormier. cormier vs lesnar at crown jewel would be better like when he fought cain