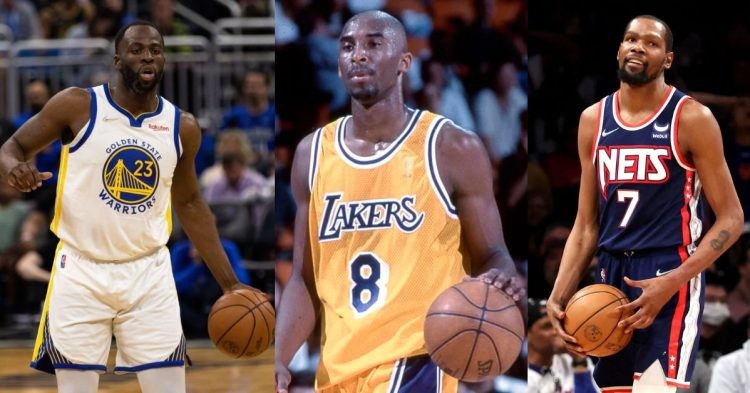 Draymond Green is having a packed offseason. His NBA team, the Golden State Warriors managed to silence the doubters and win the 2022 NBA title. We know that Draymond is no ordinary NBA player. He considers himself part of the “new media” and talks about basketball from a player’s perspective. Green recently revealed his latest all-time NBA starting 5 players.

It is important to distinguish between the GOAT debate and a player’s all-time starting 5. Not many NBA fans know the clear-cut difference between these two. Everyone is entitled to an opinion. But, it is interesting to note that  Draymond excluded Kobe Bryant and Kevin Durant from his starting 5.

Considering that these are two of the most skilled scorers that the NBA has ever seen. One must wonder which starting 5 could exclude both of these NBA legends. The starting 5 positions in the NBA are- point guard, shooting guard, power forward, small forward, and center.

As already mentioned, everyone has their own reasons to decide their all-time starting 5. It is difficult to examine how honest Draymond was when he gave out his list. Perhaps, he was “trying to say the right things” as opposed to being more objective and impartial. It is definitely wrong to call someone’s opinion biased. Nonetheless, we should look into why Green chose the players he did.

“So my all-time starting 5 is Shaq at the 5 and Steph at the 1…uum… LeBron James at… I got LeBron James at 3. Now again this is where the eras and stuff get tricky because what era of basketball am I talking about? But I’m just going to talk basketball in the sense of who I think would make a great 5. Steph at the 1, Shaq at the 5, LeBron at the 3, Timmy D at the 4, and…Did you think I was going to go with anyone other than MJ at the 2 you gotta be out of your mind.”

Choosing Steph makes sense as they are both old teammates.  Additionally, NBA analysts widely agree that Shaq was the most unstoppable force the league has seen. That is why Green chose these two first. Despite their clashes in the past LeBron and Draymond are friends now, even business partners. Therefore, there was no hesitation in giving LeBron the next spot at the 3. Green then chose Tim Duncan, the cornerstone of the San Antonio Spurs dynasty for the 4 and finally Michael Jordan at the 2.

Certainly, Kobe Bryant or Kevin Durant could have been ranked higher by Draymond. However,  Tim Duncan, LeBron James, and Michael Jordan’s spots are the only ones these two could fit into. This put Green in a complicated situation and he ended up not having both of them in his all-time starting 5.