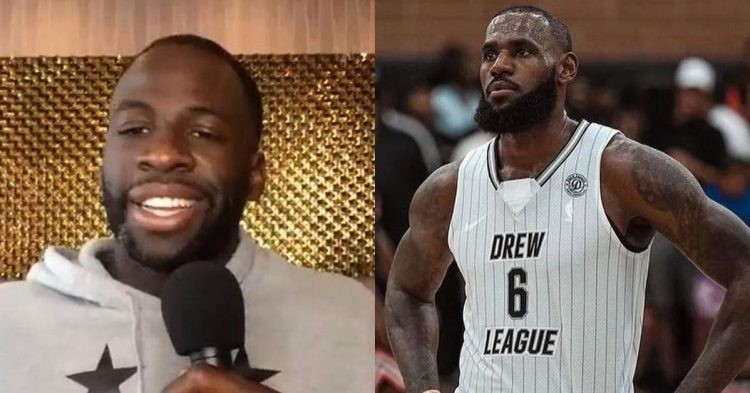 LeBron James is heading into year 20 of his NBA career with the Los Angeles Lakers. He has shown no signs of slowing down and continues to perform at the highest level. Moreover, he decided to get basketball reps at the “Drew League” and scored 42 points to get his team the win. Draymond Green reacted to this and explained the significance behind King James playing on ” The Draymond Green Show“.

It is a well-known fact that LeBron and Draymond had a bitter past. However, they are now on much friendlier terms and even business partners. As a result, there are certainly good reasons for him to show support. Be that as it may, one must wonder why Green went out of his way to explain the greatness behind the King’s recent offseason performance.

To those who do not know, the Drew league is a “pro-am” basketball league held in Los Angeles. “Pro-am” refers to a mix of both professional as well as amateur athletes. Therefore, there is no big money involved compared to the NBA.

The Warriors star explained in a detailed manner why LeBron playing and winning this game speaks to his greatness. King James winning an offseason basketball game with amateurs on the court may not seem like a big deal in itself. However, when we look at the circumstances described by Green, it brings more light to the situation.

This is quite an accurate statement. It is highly likely for any amateur to think this is his moment to rise and shine against one of the greatest basketball players of all time. Green also explained that the game was very close and the opposition was leading. However, he never felt for a second that LeBron was going to lose to amateurs.

It’s not always that fans see a Drew League game on the NBA app, but when LeBron James is playing, the story is a little different. Bron went on to score 42 points and 16 rebounds to give his team the win. It goes without saying, everybody involved in that game will remember the moment for years to come.