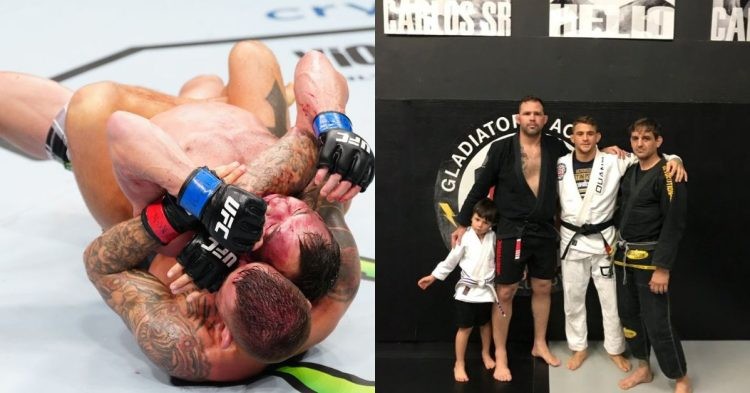 Dustin Poirier needs no introduction in the MMA world. The Diamond is ranked No. 2 in the UFC lightweight division. The former UFC interim lightweight champion is one of the best fighters of this era.

Recently Poirier received criticism from the current UFC lightweight champion Islam Makhachev on his grappling abilities and his ground game. Makhachev mocked Poirier’s black belt pedigree in Bjj and commented that many black belts are making jiu-jitsu appear bad. Dustin responded by saying “It’s definitely an insult, But it is what it is”.

Dustin Poirier has often been criticized for his ground game, with each of the last two losses inside the UFC Octagon coming via way of submission. Despite the criticism from fans alike, you would be surprised to know that Dustin Poirier is among the top elites in BJJ.

Is Dustin Poirier a black belt?

The Diamond received his black belt in BJJ in 2017 from his BJJ coach Tim Credeur. More than 11 years after starting out as a BJJ practitioner, Poirier received his Brazilian jiu-jitsu black belt from longtime mentor and former UFC fighter Tim Credeur.

Credeur is the owner of the Gladiators Academy, where Poirier formerly trained. He has raked in eight wins via way of submission in his mixed martial arts career.

I’ve been doing Jiujitsu for close to 11 years now. Today I received my black belt! Thanks to everyone who has been part of my journey!! pic.twitter.com/Xz2LeYsnqU

Poirier now trains with ATT trainer Marcos DaMatta, a black belt under Carlson Gracie since 1997, and is the BJJ instructor of Dustin Poirier. He has won Multiple BJJ championships.

Poirier’s most recent submission win came against Michael Chandler. After an entertaining two rounds, Poirier submitted the former Bellator champion via rear naked choke. In the post-fight interview with Joe Rogan, Poirier responded to Islam, who had earlier mocked his ground game with a classy response.