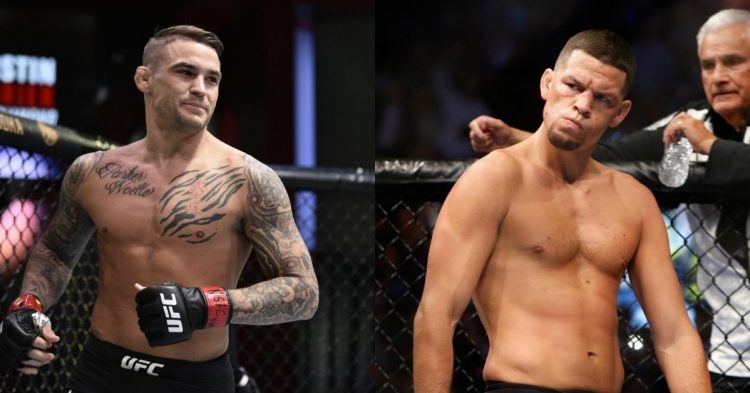 The UFC 279 main event is off as Khamzat Chimaev misses weight by 7.5lbs! The PPV was set to feature Khamzat Chimaev vs Nate Diaz in the main event. However, that is now out of the window as Khamzat has weighed in much heavier than the non-title welterweight limit of 171lbs.

The UFC is now looking for a new opponent for Diaz and Dustin Poirier has thrown his hat into the mix.

Dustin Poirier and Nate Diaz were officially booked to fight each other at UFC 230 in Madison Square Garden for the co-main event. But it did not happen as neither party was happy with the terms of the fight and Poirier dropped out because of an injury. But it looks like fate has provided the company with a chance to finally make the fight happen.

After Chimaev’s failed attempt, Dustin Poirier responded to a fan and stated that he can positively make 170lbs. He is currently at 176.6bs. Dustin is already in a fight camp as he is set to fight Michael Chandler at UFC 281. So making the welterweight limit may not be hard for The Diamond.

He also retweeted a tweet from his coach Mike Brown that stated Dustin is just chomping on the bits for the phone call from UFC to arrive.

Kickin it in Louisiana with DP and co. – waiting on that phone call from Vegas – #UFC279 #PoiriervsDiaz #anytimeanywhere @DustinPoirier @EricScallan pic.twitter.com/H34NqPPWBj

Both fighters wanted to fight each other since the beginning of the year. But the UFC denied them the opportunity. What a twist of fate we have here that Nate Diaz vs Dustin Poirier may just be the fight to save the UFC 279 card.

Following the weight debacle, fans went into a frenzy and wondered whether the fight between Chimaev vs Nate will happen or not. Although there is no official word on it, there are rumours that Nate’s camp has dismissed the notion of accepting a catchweight fight against Chimaev. But there seems to be a ready-made alternative for Nate in Tony Ferguson.

From the Diaz camp. Khamzat fight is OFFICIALLY OFF. UFC & Diaz both want to stay on the card and want another opponent. Ferguson v Diaz is the favorite so far.

Spinnin Backfist is reporting that there are a few options for Nate on the table. But Ferguson is the front runner for the bout. Tony has already weighed in at 171lbs for his originally scheduled bout against Li Jingliang. So making the fight between Tony and Nate will be the easiest option for the UFC. But there also remains a chance that Nate does not fight on the card at all.

What do you think of the situation? Do you think Dustin Poirier is a realistic candidate to replace Khamzat Chimaev? Or the UFC will go the safe route and book Nate Diaz vs Tony Ferguson as the new main event for UFC 279? Let us know in the comments down below