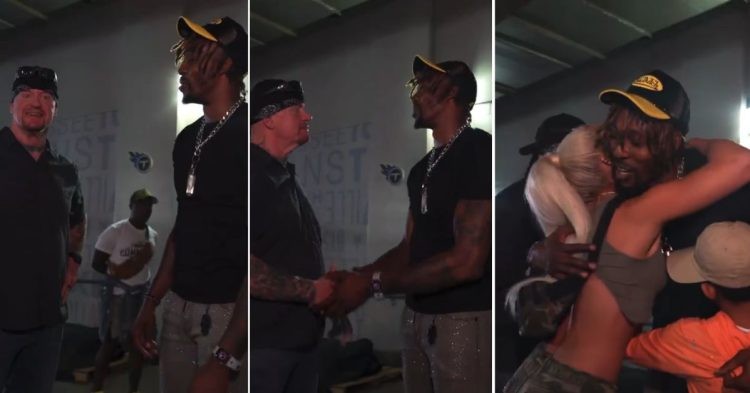 Dwight Howard is an NBA champion and 3-time defensive player of the year award winner(DPOY). He has been in the league for 17 years now. However, it is unclear whether he will be offered a new contract for the 2022-2023 seasons. He was spotted with WWE legend “The Undertaker” and seemed to get along with the former wrestler’s family.

Howard helped LeBron James and the Los Angeles Lakers win the 2020 NBA title. He claims that there are several good years of NBA basketball left in him. But since he is yet to finalize a deal in the NBA, the 2020 NBA champion is looking to potentially start a career in the WWE. One must wonder what Dwight Howard and the Undertaker spoke about and what this interaction could mean.

Most people already know that sports personalities and athletes have mutual respect, regardless of their individual sports of choice. The WWE may be largely viewed as an entertainment industry. However, that does not completely mean that the wrestlers are just actors. They are all allowed to consider themselves to be athletes, simply putting on a show for the world to watch.

Dwight and Mark William Calaway were spotted together before the WWE Summer Slam 2022. Avid WWE fans will know that Calaway is none other than the Undertaker, a wrestler the public has been intrigued by and admired for several years now. Both personalities met backstage during the Summer Slam. It is quite difficult to transcribe the exact conversation taking place. This could be because of the background noise or even their decision to speak softly. Only certain parts of their conversation were recorded.

The Undertaker seemed to be quite nice and even took the time to compliment the NBA star, “Pleasure to meet you man, I’ve enjoyed watching you play for years.” Dwight was quick to return the praises and seemed genuinely happy to be in the wrestler’s presence. The Undertaker’s wife, Michelle McCool also went over and exchanged pleasantries.

The highlight of the interaction was when Kaia Calaway gave Howard a high-five that seemed to hurt him. The NBA star began pretending that it hurt him. To this, the Undertaker exclaimed, “She gets that from her momma.”

If Dwight hopes to have a WWE career as he has already mentioned, it is a good idea to establish contact with and learn from one of the best wrestlers ever. Be that as it may, if a high-five from a 10-year-old girl makes him feel real pain, he will have to consider abandoning whatever WWE dreams he might have had.