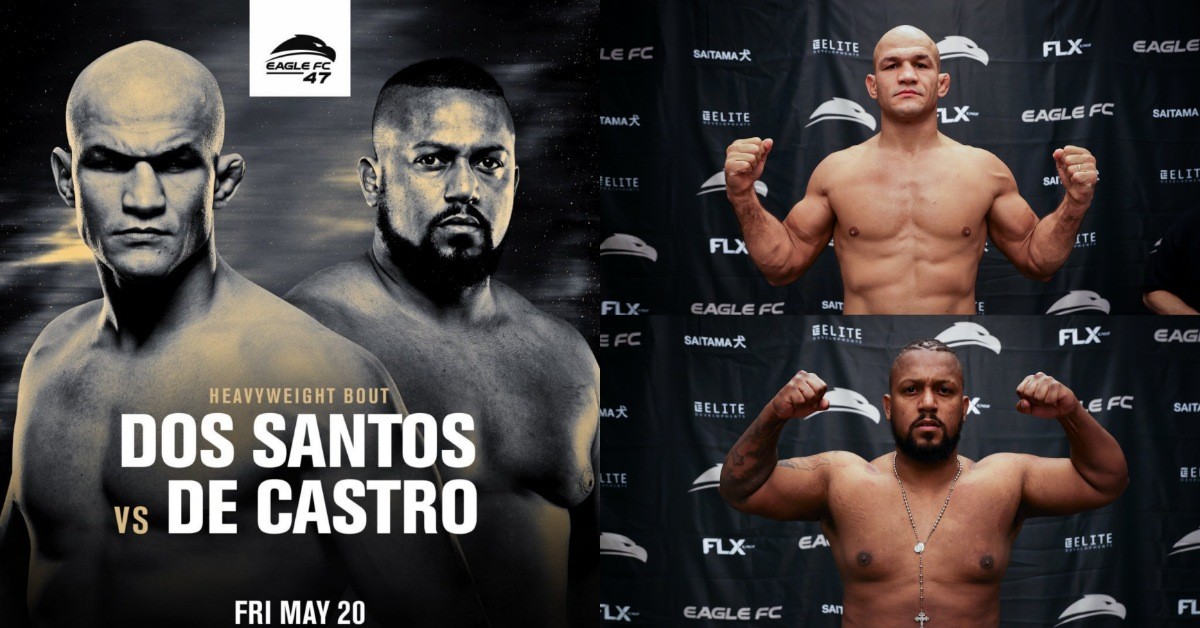 Junior Dos Santos vs Yorgan De Castro will headline Eagle FC 47. The event will go down live from the FLXcast arena in Miami, Florida. Fans can watch the fights for free on both the FLXcast app and the official Eagle FC website. For all the details regarding the event, click here.

Junior Dos Santos is a former UFC heavyweight champion. He is most famous for knocking out Cain Velasquez within 18 seconds. He captured the belt on the very first big Fox network card. JDS also holds a victory over prominent fighters such as Mark Hunt, Stipe Miocic, Derrick Lewis and Tai Tuivasa.

He was let go from the UFC in 2020 after losing 4 fights in a row. So was the case with his opponent this Friday. Yorgan De Castro was cut from the UFC on the back of 3 straight losses. He had an overall record of 1-3 in the UFC. But he has somewhat turned his career around since then. De Castro is on a 2 fight win streak and submitted Shaun Asher during his last fight in Eagle FC.

Who will have the upper hand in the fight on May 20th? Let’s take look at their stats below to have a better on what to expect in the fight.

Since his UFC release, Junior Dos Santos has not been active. Although he made a few appearances on a few pro-wrestling shows, JDS has not been in a competitive fight in almost 2 years. Yorgan De Castro on the other hand, has had 5 fights since 2020. Hence, De Castro will be the fresher fighter heading into the event.

De Castro has also absorbed much less punishment throughout his career. In his 11 fights, the 34-year-old has suffered only 1 KO stoppage in his career. The rest of his 2 losses came via decision. Whereas JDS has been stopped 8 times so far in his career. His brutal losses to fighters like Cain Velasquez, Francis Ngannou and etc have taken their toll.

Lately, JDS’ chin has deteriorated severely. Hence, Yorgan will look to make it an all-out brawl. Junior has a tendency to engage in a firefight instead of taking a step back. However, that may just prove to be his downfall as De Castro has enormous power behind his punches. But the same applies to the 39-year-old as well.

JDS and De Castro have 15 and 5 knockouts respectively. They also hold 1 submission victory each. Hence the fans can expect to see a very exciting while it lasts. Because the prospect of an early finish is very high.