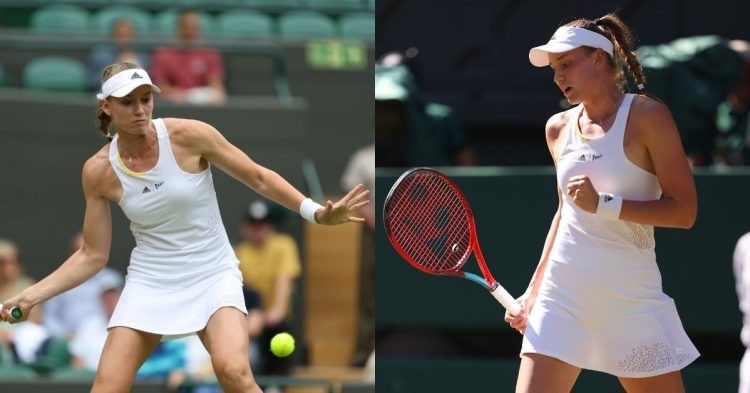 Elena Rybakina will play her first-ever grand slam final when she takes on Ons Jabeur at the final of Wimbledon. She is currently ranked 23rd in the world even though her career-best ranking is 12. Her entry into the world of tennis and the hurdles she crossed to reach where she is now, is a fascinating story.

How did Elena Rybakina get into tennis?

From a very young age, Rybakina has shown signs of a sports prodigy. She wanted to pursue a career in either gymnastics or ice skating. Both the sports were quite similar when it came to flexibility. However, her tall stature forced her to put an end to that dream.

Seeing her athleticism, her father nudged her in the direction of tennis. He specifically chose tennis because of his personal interest in the sport. Rybakina started playing tennis at the young age of six. With time, she improved a lot and made her way up in the WTA rankings.

How is Elena Rybakina able to play in Wimbledon despite being born in Russia?

Rybakina was born in Moscow in 1999. It is impressive to note that she reached the Wimbledon final at a very young age of 23. However, Wimbledon has banned Russian and Belarusian players from participating in the tournament this year due to the ongoing Russia-Ukraine war. Then how is Rybakina able to participate in Wimbledon.

While Rybakina was born in Russia, she is no more a Russian citizen. Her initial development in tennis took place in Russia but she then moved to Kazakhstan. As per Sportskeeda, Rybakina took Kazakh citizenship in 2018 at the age of 19. She also changed her federation from Russia to Kazakhstan.

One of the main reasons for Rybakina to move to Kazakhstan was the financial support offered by its federation. Ever since 2018, Rybakina has played tournaments representing Kazakhstan. That is the reason why Rybakina was able to take part in Wimbledon this year.

A player born in Moscow, who represented Russia till 2018, will contest a final in a year Wimbledon banned Russians and Belarussians.

In hindsight, Rybakina’s decision to change citizenship worked for her. She not only got to participate in Wimbledon this year, but also made it to the final and has a shot at the title.