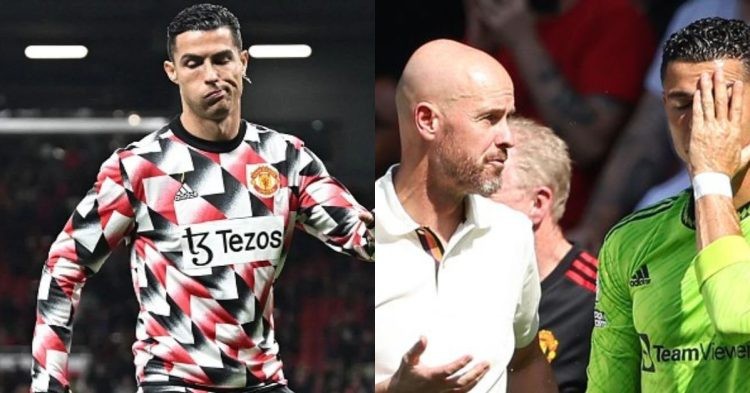 Manchester United‘s performance against Tottenham yesterday was arguably their best so far this season. They dominated possession and all other stats throughout their game and the front two of Harry Kane and Heung Min Son barely had any scoring chances. Amidst all this positivity, United’s talisman Cristiano Ronaldo walked down the tunnel before the final minute mark.

Cristiano Ronaldo down the tunnel before the final whistle at Old Trafford 😬 pic.twitter.com/MvWBHGsbig

He was an unused substitute in the 2-0 win at Old Trafford. It is obvious why Ronaldo is frustrated with his situation at the moment. But this sort of behavior in a moment of positivity for his club is far from acceptable and very disrespectful.

Fans react as Cristiano Ronaldo “walks out” on Manchester United

Manchester United fans were shocked to see Ronaldo walking down the tunnel before the match was over. Fans believe it was a very selfish move.

Ronaldo when United play well without him pic.twitter.com/8yryD0UV4V

Not only fans but experts are also now of the opinion that Ronaldo feels “he is bigger than the club.”

🗣️ “He clearly thinks he is bigger than the football club.”

The Soccer Special panel react to Cristiano Ronaldo walking down the tunnel before full time 👀 pic.twitter.com/XiEuKp4nws

Some fans also blame the Glazers for their mismanagement of the situation.

Ronaldo wants to leave, Ten Hag wants to move on. Amazes me people are shocked we’ve ended up here. Totally preventable if we had football people running the club instead of bankers.

Others feel that Ronaldo is solely to be blamed and those defending him are just his fans.

Ten Hag really told Cristiano Ronaldo to warm up and ended up leaving him on the bench.

If this is not disrespect, I don’t even know what it is anymore. pic.twitter.com/0CWZUIcFCi

How the Ronaldo situation will develop at Old Trafford will be very interesting and well-documented post the World Cup.

Why did Ronaldo walk off before full time and what next?

According to reports, Ronaldo not only walked off the pitch before full-time but also left Old Trafford before his teammates reached the dressing room. Erik ten Hag started Marcus Rashford, a left winger in Ronaldo’s position last night. His other main striker, Anthony Martial was injured as well, so it seemed only logical that Ronaldo would start.

In a surprising move, it was Rashford who started and played 90 minutes. Ronaldo probably felt disrespected by this. When the camera panned to him mid-game, he did not look very happy either. He did put in a transfer request this past summer, which has been reported extensively.

Cristiano Ronaldo went down the tunnel at Old Trafford before final whistle. 🚨🔴 #MUFC

Erik ten Hag: “I will deal with that tomorrow, not today. We are now celebrating this victory”. pic.twitter.com/Ll4raQovL8

Now it seems even Erik ten Hag is not interested in including Ronaldo in his plans. On being asked how he would deal with this situation, ten Hag said, “I will deal with that tomorrow, not today. We are now celebrating this victory.”

Keeping in mind Ronaldo’s current behavior and his intention to leave the club, it seems unlikely he will start regularly under this manager. His professionalism has always been at the top, but yesterday’s display was truly disrespectful. His future at Old Trafford may well be over following his actions last night.