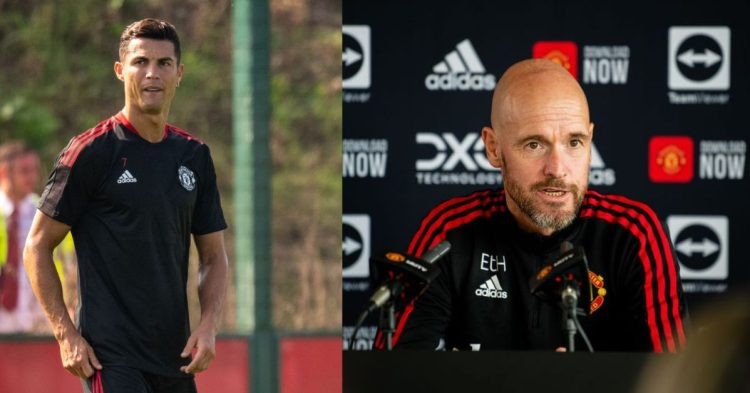 Erik ten Hag addressed the media before Manchester United‘s trip to Chelsea. The main topic of discussion was Cristiano Ronaldo and his suspension following his walking out during the midweek fixture against Spurs.

Ten Hag asked if Ronaldo refused to come on for #mufc vs Spurs: “Yes”.

The club is reportedly 100% behind Erik ten Hag’s decision and it seems the fans are as well. He has admitted that United will miss his presence on Saturday.

Erik ten Hag’s comments on the suspension of Cristiano Ronaldo

Speaking about the suspension and why Ronaldo is training alone today, Ten Hag said, “It will be a reflection for him, but also for everyone else.” This sort of reaction had occurred in pre-season when Ronaldo and a few other players left Old Trafford before the match was over. This was in a pre-season friendly against Spanish club Rayo Vallecano.

He explained, “I’m the manager. I’m responsible for the culture, I have to set the standards and values. After Rayo, I said leaving early was unacceptable. The second time there have to be consequences. Football is a team sport. You have to set a certain standard.”

He also remarked on the absence United would feel due to the suspension of Cristiano. “We will miss him tomorrow. It’s a miss for the squad but it’s important for the attitude and mentality of the group and now we have to focus on Chelsea as that is important.”

Ten Hag seems adamant to set his authority at the club and this has been lacking at Manchester United since Jose Mourinho. While Mourinho commanded the authority of his players, he never could gain their respect and trust. Things seem to be a bit different with Erik ten Hag and United may be on the right track with this new manager.

Erik ten Hag on the relationship between him and Cristiano

The first question Erik ten Hag was asked in the press conference was whether Ronaldo did in fact refuse to be subbed on against Spurs. “Yes,” Erik ten Hag’s reply was short and simple.

He was also asked if any conversations took place between him and the Portuguese striker. Ten Hag refused to give out any details, which is understandable as he is trying to manage a very big and important player.

“What the talk – if you ask about that – is between Cristiano and me. The statement is also clear, I think. He remains an important player in the squad.“

Ronaldo wants to play in the Champions League. His walk down the Old Trafford tunnel sent a statement not only to Ten Hag, but also to his teammates, the club’s owners, other interested clubs, and everyone watching. He does not want to be on the bench for the Premier League and start only Europa League games.

Ronaldo is reaching the end of his career, and like his greatest rival, Lionel Messi wants to finish it at the highest level possible. At the moment this is not possible at Manchester United, and it seems more than likely he will leave either in January or during the summer transfer window.