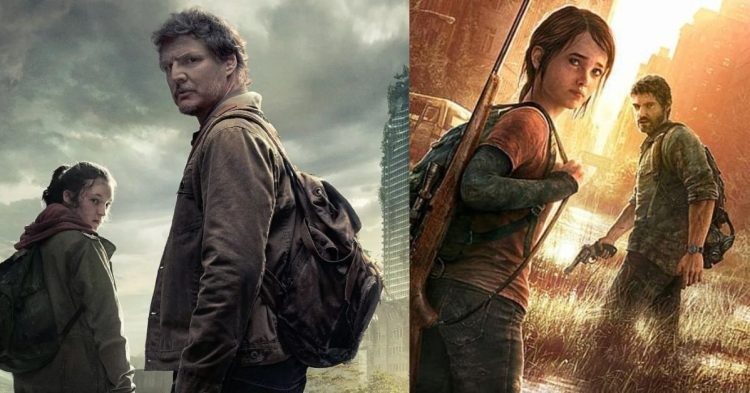 2013 Videogame The Last of Us has been adapted into a series (Credits: HBO)

2013’s universally acclaimed videogame, ‘The Last of Us’, made by Naughty Dog, has been adapted into a TV series by HBO. Created by Craiz Mazin, the writer of the Scary Movie series, and Neil Druckmann, the creator of the 2013 game, the show follows a smuggler, Joel (played by Pedro Pascal), who has to escort a teenager, Ellie (played by Bella Ramsey) across the United States devastated by a terrifying infection.

Naturally, the fans of the video have been wondering how the HBO series holds up to the video game. Due to the bad reputation of video games being adapted into highly disliked adaptations, fans were right to be concerned for the iconic series.

The fans, however, will be thrilled to know that not only the series is similar to the content of the game, it makes some additional changes that improve the already beautiful story-telling of the 2013 Game of the Year, which was written by Neil Druckmann.

Many would be curious about the changes the series makes to the award-winning formula of the game. Let’s look at all the changes below.

Spoiler Alert: The content below will have spoilers for the video game and the series, The Last of Us. It is advised that you proceed with caution and at your own discretion.

What makes The Last of Us game different from its TV series?

When the series first aired on January 15, 2023, fans were quick to notice the changes to the setting. Most of the changes noticed yet are not huge in scale but do add dramatization and character to an already great story. Fans were worried about the adaptation due to a bad reputation of video game adaptations in the past, since big names have been reduced to mere dust due to how poorly they were adapted to the big screen.

The most notable changes, however, was the increased screen-time of many characters. Let’s look at some of the major changes below.

In the games, the outbreak of the destructive brain infection known as ‘Cordyceps’ takes place in the year of 2013. The prologue of the game is based in 2013 and the events leading up to Joel meeting Ellie take place in 2023, twenty years after the prologue.

This change was probably made to show the series in a real life chronology instead of a fictional one.

The spread of the Cordyceps infection

In the story, it could be spread through the bite of an infected, which is how Ellie finds out that she is somehow immune because she was bitten and did not turn, which was a major plot point in the game and the reason why Joel acted as a security escort for her. The infection could also be spread from person-to-person through spores in the air that carried the infection, a reason for the gas masks in the game.

The infection got a major change in the series. The airborne spores are not a concept in the series and instead, the infected have plant-like vines and tendrils that emerge from their mouth to infect others. Neil Druckmann was interviewed about this difference.

Neil Druckmann told Collider, “We decided, early on, that we didn’t wanna [use spores in] the show. Eventually, those conversations led us to these tendrils, and then, just thinking about how there’s a passage that happens from one infected to another, and like fungus does, it could become a network that is interconnected. It became very scary to think that they’re all working against us in this unified way, which was a concept that I really liked.”

The show also introduced a hivemind of the infected and the fact that the infected were connected to each other through a single network or ‘hive’.

In the prologue of the game, players get control of Sarah, the daughter of the series and games’ main character, Joel. The players play through the perspective of Sarah for the most part of the prologue excluding the cutscenes. The prologue is set when the outbreak first occurs.

The players continue playing as Sarah right up until ‘that shocking scene’ that blew the minds of many playing the game for the first time. We will keep the details of that scene a secret.

Sarah is a major catalyst for Joel’s empathy towards Ellie, the teenage character he’s supposed to escort, due to them being of similar age.

In the video game, you only get to play as Sarah for ten to fifteen minutes, that is, throughout the length of the prologue excluding the cutscenes. The start of the story has her gifting her father a watch that she got repaired prior to the story. The series takes this prologue and gives it some more depth to make the audience get attached to her.

In the series, Sarah (played by Nico Parker) is a lot more fleshed out. we see Sarah’s school life, her getting the watch repaired before gifting it to her father, studying and baking at a neighbor’s house. The scene that shocked millions remains largely the same, emotional and heartbreaking.

Scaling back of the violence

Video games, specifically story-based action games like The Last of Us, need to keep their players engaged through the story telling and gameplay since they cannot be as cinematic and cannot depend on camerawork, unlike a series.

The GOTY 2013 had a lot of crude violence with a lot of focus on gore and dismemberment that gave it a hard 18+ rating in terms of violence. Story alone isn’t enough and players need constant reminders that the world is brutal in a post-apocalyptic video game. The violence helped the players stay on the edge of the seat, anticipating what the next encounter with the infected or humans would bring.

HBO’s ‘THE LAST OF US’ series will only keep the “very essential” violence.

“That allowed the violence to have more impact than in the game, because when you hold on showing the threat & you’re seeing people’s reaction, that makes it scarier.”

The series can rely a lot more on the actors and less on violence due to there being no interaction between the audience and the series. Hence, the violence in the series was scaled down except for some critical scenes so that the series is a lot more approachable by people who might be repulsed by the exaggerated but necessary violence of the video game.

Neil Druckmann was interviewed by GamesRadar and gave the following statement:

“We need a certain amount of action, or violence (in the game), that we could use for mechanics so you could connect with Joel and get into a flow state. Then you would really feel like you’re connected with this on-screen avatar and you’re seeing the world through his eyes.”

“But that doesn’t exist in a passive medium. One of the things that I loved hearing from [co-creator Craig Mazin] and HBO very early on was, ‘Let’s take out all the violence except for the very essential.’ That allowed the violence to have even more impact than in the game, because when you hold on showing the threat and you’re seeing people’s reaction to a threat, that makes it scarier.”

“And when we do reveal the infected and the Clickers, you get to see what brought down humanity and why everyone is so scared.”

Certainly, being in the control of a character and watching them on-screen are two different experiences and violence plays a part when you’re interacting with the medium, but not a whole lot when you there is no interaction.

Sarah, Joel’s daughter, was white and had straight, blonde hair in the game. In the series, she is black and has black, curly hair. We also get to see a lot more of her life as compared to the games, like her life in school, her studying sessions, her baking with the neighbors, and the most major of them all, her actually going to get her father’s old watch repaired. Her story, however, remains the same in the series as it did in the games.

Tommy is the younger brother of the series’ main character, Joel. In the series, he is played by Gabriel Luna. Unlike the game, we see Tommy visiting his brother and niece. We also see him getting jailed for being involved in a bar fight and Joel has to go and bail him out.

In the game, during the time skip, Tommy was seemingly not in contact with Joel. The brothers run into each other in Salt Lake City during Joel and Ellie’s journey to the Fireflies. In the series, the brothers are seemingly in contact and Tommy suddenly goes radio silent which prompts Joel to go out and find him, partially agreeing to take Ellie to the Fireflies.

Tess Servopoulos (played by Anna Torv) is a smuggling partner of Joel. Her role in the series and the game is largely the same, helping Joel in smuggling goods into the quarantine zone. However, she seems to be more romantically interested in Pedro Pascal’s Joel, unlike her video game counterpart where the relationship was a lot more unambiguous.

Revealed in the premiere are two more characters, Bill and Frank (played by Nick Offerman and Murray Bartlett, respectively), who are in radio contact with Joel giving information on the latest events. They do this by coded messages, which happen to be songs that were released in different years.

In the games, Joel only meets Bill, who happens to be an old friend and not a current acquaintance. They meet in Jackson when Joel is in critical need of a working car. Frank, by this time, had died by committing suicide.

Most notably, there is Kim (played by Natasha Mumba), who is Marlene’s (played by Merle Dandridge) right-hand woman. Marlene is the leader of the organization called, The Fireflies. She is in charge of looking after Ellie. She is played by the same actress in both the game and the series. There is also Lee (played by Max Montesi), a FEDRA guard who gets in a dodgy deal with Joel.

There are also the neighbors of Joel and Sarah with whom the characters spend time but they all succumb to the infection soon after.

It’s clear that the series made several changes to the formula while the main ingredients remained the same. The introduction of new characters adds a lot more depth to the story, giving it a wide array of storylines to focus on besides the main characters.

The changes, however, do not affect the story. The first episode premiered on January 15, 2023, on HBO, and opened to highly praised reviews by both audience and critics alike. We hope the tradition continues for not just the rest of The Last of Us but for every video game adaptation in the future.