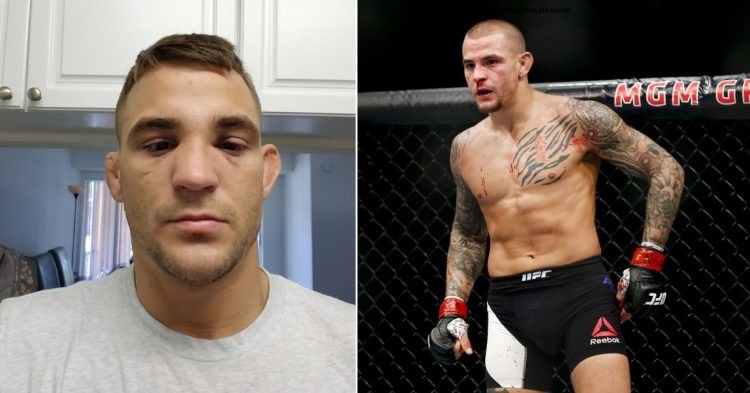 You don’t even have to look at Dustin Poirier too closely to notice his twisted nose. It’s not rare for mixed martial artists to have a twisted nose, and for Dustin Poirier, it is something he has lived with, for almost six years now. Despite two surgeries, Poirier still suffers from the consequences of a broken nose.

“I have had two surgeries on my nose. I have cadaver rib cartilage in my nose’s bridge.” Poirier said in a conversation with Joe Rogan on JRE.

In conversation with Joe Rogan, the former UFC Interim Lightweight Champion revealed how he got he got the crooked nose. “When I fought Joe (Joseph) Duffy, he crushed my nose. He crushed it. The first surgery, I still couldn’t breathe, so they had to break it and stuff.” Poirier revealed.

“I am not gonna mess with it again until I am done fighting because this is gonna get smashed.” He further added.

Dustin Poirier fought Joseph Duffy in his 14th UFC fight back at UFC 195 in January 2016. The fight marked just the fourth time that Poirier went full three rounds at the time.

Despite getting hit with some clean shots, Poirier survived the scare and rose through adversity to pick up a comfortable unanimous decision victory.

Dustin Poirier cannot breathe from one side of his nose

Poirier also revealed that he cannot breathe from one side of his nose and has to pull his cheek muscle in order to do that. Life of a fighter nonetheless!

Also pretty sure I broke my nose again in camp getting ready for the 2nd fight with Eddie. But not a 100% sure because I didn’t go to the doctor https://t.co/bXKhea5Don pic.twitter.com/5hGCjmIEkw

Poirier revealed when he had the surgery the first time around, he couldn’t breathe properly and the surgeon had to break his nose again. Upon the second surgery, the problem still persists with his right nostril.

The cartilage is still crooked after 2 nose surgeries. Anytime my face swells it really shows. https://t.co/vXTOMmtlbr

“Even to this day, my right nostril is blocked.” Poirier said, “I have to pull the skin on my face to let the air pass.”

Dustin Poirier has no plans of going through another surgery knowing it might break again if he continues fighting. The former interim lightweight is still an active competition and reigns at the top of the UFC’s lightweight division.