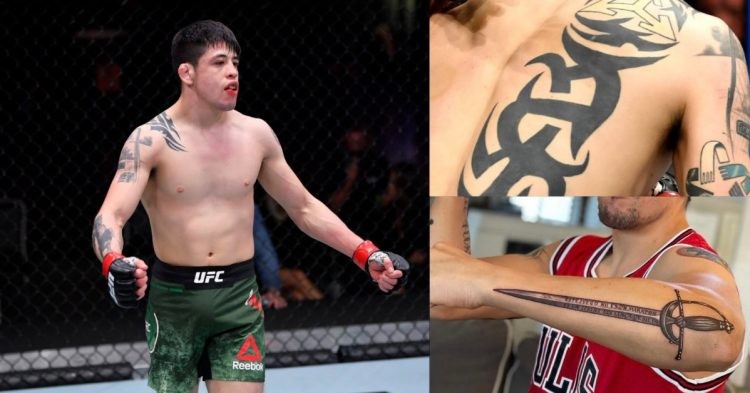 Brandon Moreno has 8 tattoos. (via BodyArtGuru)

The UFC flyweight division is filled with exciting fighters. But no other fighter has captured the fan imagination better than Brandon Moreno. His all-action style of fighting has massively contributed to the recent transformation of the flyweight division. Not so long ago, the UFC wanted to get rid of the division. But fighters such as Moreno, and Deiveson Figueiredo have kept the division alive.

Brandon Moreno is one of the most colourful personalities in MMA. He has an infectious laugh and his joyful nature makes him a treat to watch. Moreno is also a man of culture and has gotten tattoos to show his appreciation for his heritage. So what tattoos do Moreno have? Let’s find out.

How many tattoos does Brandon Moreno have?

On the left side of his shoulder, Moreno has the tattoo of an iconic Disney character. The cartoon character that is synonymous with Disney is Mickey Mouse. It is no secret that Moreno is a fan of cartoons. So the tattoo is a nice way to acknowledge something that he loves. It brings us to something else that is essential for his craft.

His right forearm consists of the words ‘Jiu Jitsu.’ Although the fans may know Moreno as primarily a striker, he holds a black belt in BJJ under Raul Arvizu. Moreno also has a tattoo of Cuauhtemoc on the back end of his right forearm. It is a famous monument in his city Tijuana. There is also a tattoo of a bridge on his right bicep which is a great landmark of Tijuana. It is called ‘The Clock.’

On the back of his right bicep, there is a colourful tattoo of a pentagon star. He also has the tattoo of a sword on his left forearm. But perhaps the most important tattoo on his body is the one on his left shoulder. He has a badge with ‘My Little Girl’ inked around it. The badged consists of the letter ‘M.’

Moreno has three daughters who are named Maddie, Megan and Morgan. So the letter ‘M’ carries a lot of significance for him. It shows how much he loves his family. The tattoo is a nice gesture to show his daughters how much he really cares for them.