It won’t be wrong to say that tattoos have almost become synonymous with combat sports athletes. People get themselves ink in a reminder to something or someone, often, people just like to have tattoos and it might not have a deep resounding meaning behind it. On the other side, there are fighters who refuse to get tattoos, but Charles Oliveira is not one of them. 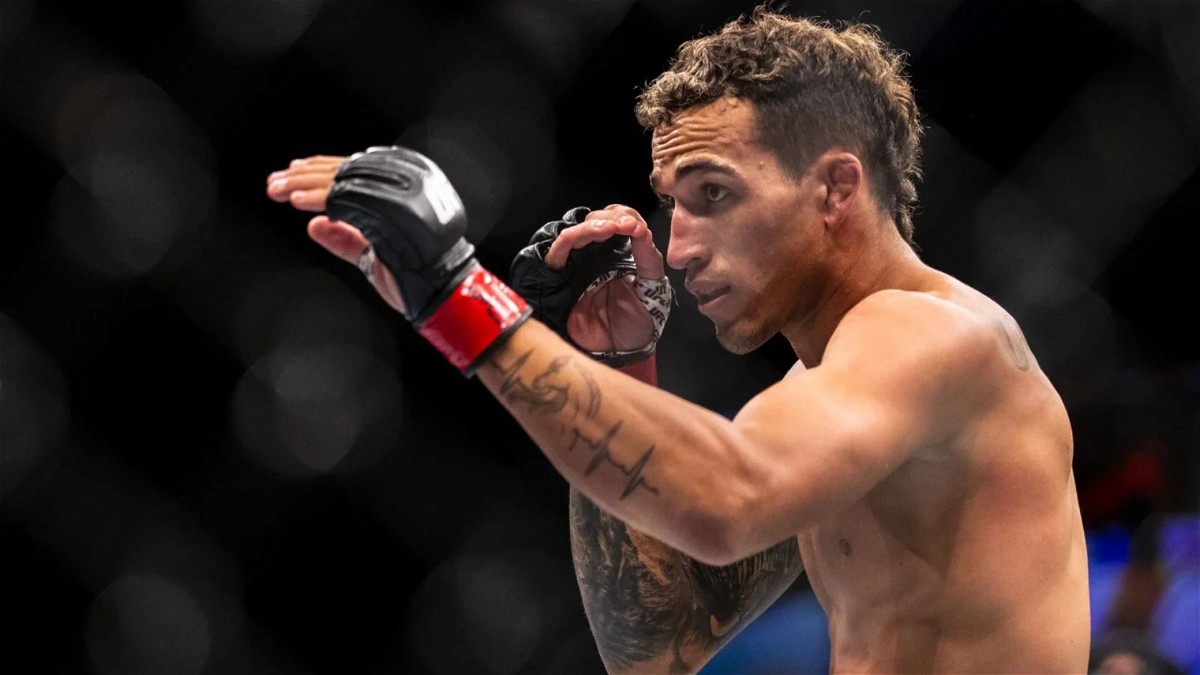 Charles Oliveira has slowly transitioned into an elite mixed martial artist. The 32-year old Brazilian fighter has time and again proved his credibility inside the Octagon and continues to impress fight fans around the world with his exciting performances.

Charles Oliveira currently holds the record for most submission wins in UFC history, along with most post-fight bonuses in the company. The Brazilian fighter ranks at the top of the lightweight division and has shown that he can hang with any fighter in the world inside the Octagon.

Let’s try to understand the meaning behind Charles Oliveira’s tattoos and determine his reasons for having them.

Oliveira has a simple tattoo signifying heartbeat on his left-hand net his wrists. It is a common tattoo with many people opting to go with the design in a certain reminder of the value of life.

The horse tattoo on Charles Oliveira

It’s no secret that Oliveira loves horses. Oliveira has a tattoo of a majestic horse in his right hand, stretching from his elbow all the way to his biceps. The Brazilian fighter is a two-sport athlete, trying his luck in the local sport known as harness racing. Oliveira has a great interest in harness racing and continues to be a follower of the sport in his hometown.

Also Read: Here’s Everything You Need to Know About Beneil Dariush and His Wife and Family – Sportsmanor 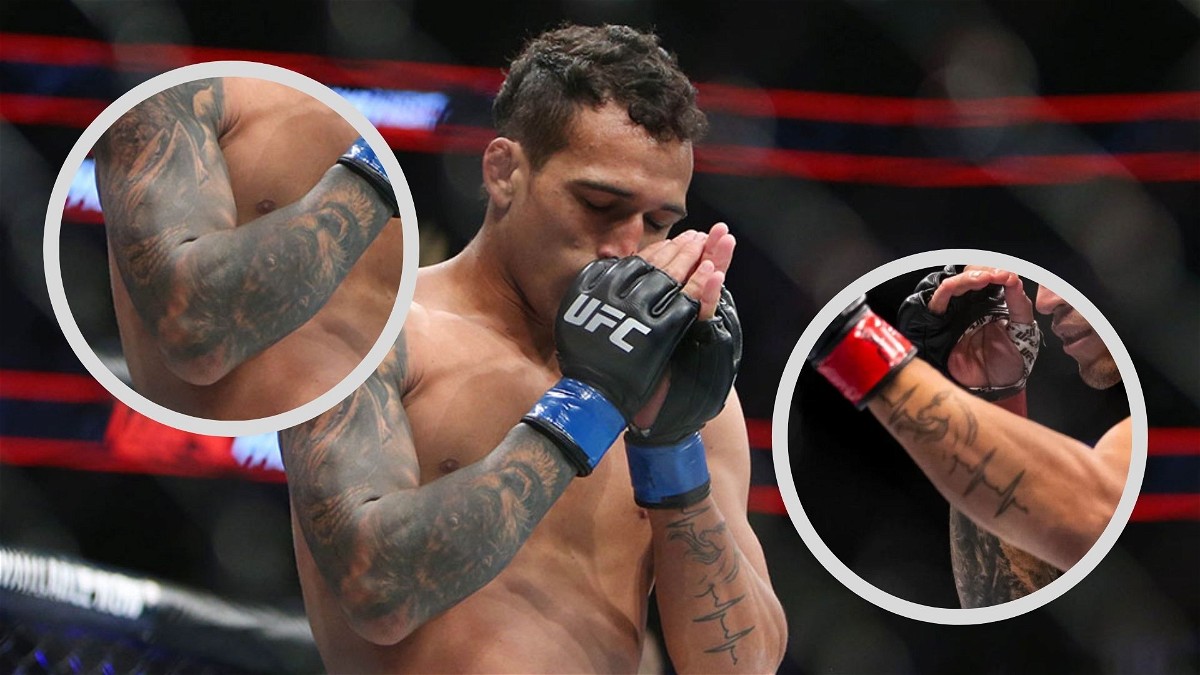 “Harness racing is a real passion for me. When you ride a horse, when you brush them, give them a bath, it makes me feel peaceful.” Oliveira reveals he has spent a lot of money on harness racing, with the sport continuing to be his passion other than mixed martial arts.

Oliveira also has a tattoo of a lion on his right hand, signifying courage and bravery. Oliveira has seen adversities many times inside the Octagon, even suffering a career-threatening injury against Max Holloway early in his career. Despite the early obstacles, Oliveira has overcome everything that life has thrown at him, only to come out on top.

With more than a decade with the company, the Brazilian fighter has come a long way since making his UFC debut at the tender age of 21. The Brazilian fighter has been with the company for more than a decade, competing in the elite mixed martial artist promotion for a really long time. Needless to say, he has gotten better, and at 32 years of age, the future seems bright for Do Bronx. 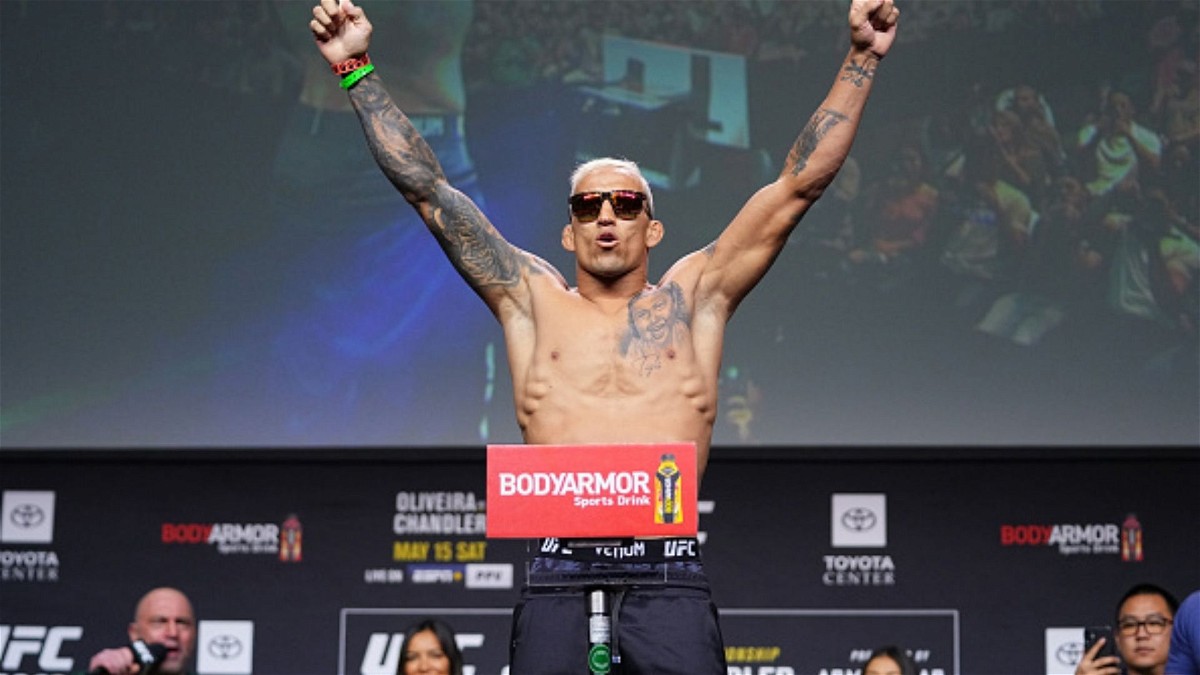 Not much information is available about his other tattoos. However, we do know that Oliveira has inked his family’s name on his back. “Oliveira” is written on his back, signifying the value of his family’s name. Other fighters who have gone with similar tattoos include fighters such as Justin Gethje and Conor McGregor.

Charles Oliveira appeared with a new tattoo ahead of UFC 262 fight against Michael Chandler for the vacant UFC lightweight championship Oliveira’s new tattoo grabbed the attention of many fights fans, with Oliveira inking the face of his beautiful daughter Tayla on his left chest.

Despite the incredible popularity, Charles Oliveira has kept his personal life a secret. However, the Brazilian fighter often shares adorable photos with his daughter, sharing bits and pieces of his personal life with his fans around the globe.

Charles Oliveira gets two new tattoos of his parents

Charles Oliveira has well above 10 tattoos on his body so far. However, he is not done just yet. Alongside his daughter’s face on his chest, Oliveira also included two of the most important people in his life.

In March of 2022, Charles put two new tattoos on his body. He inked the faces of his parents on his chest. The 32-year-old made this incredible gesture as a sign of gratitude towards them for everything that they had done for him. He posted a detailed video of the new ink on Instagram.

Where is Charles Oliveira from?

Charles Oliveira is Brazilian who was born on 17th October, 1989. He grew up in the slums (favela) of Guarujá, Sao Paulo. He grew up in a under privileged household. Oliveira was introduced to Brazilian Jiu-Jitsu (BJJ) pretty early in his life. He developed a love for martial arts from there and the rest is history.

Charles Oliveira did not have much of a formal education. His parents could not afford to put him in a school. But Charles has grown up to be a great man. He regularly does charity work to help his community as well.