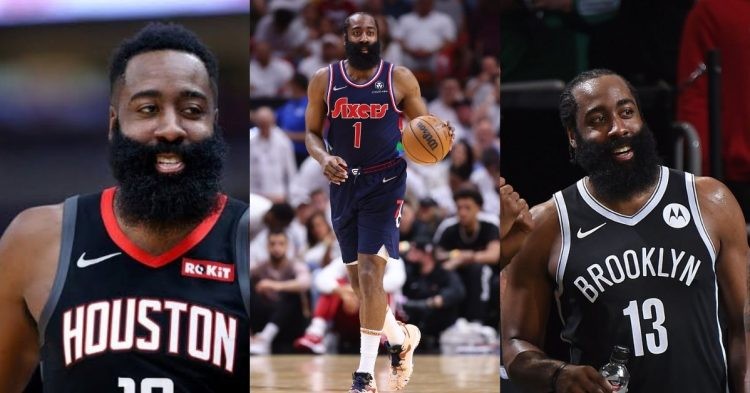 James Harden is one of the best scorers that the NBA has ever seen. He has won 3 scoring titles in his career so far. He has also won the Regular Season MVP and 6MOTY awards but that’s not all. Perhaps the most impressive thing Harden has done on an NBA court is his 30-point game streak during the 2018-19 season.

The streak is over.

Harden’s stretch of 30+ point games comes to an end at 32 pic.twitter.com/nhzWvdBaYQ

James Harden scored 30 points in 32 consecutive games during that season. While doing so he completely obliterated Kobe’s record for the most consecutive 30-point games since the 2000-01 season. Kobe had 16 games in a row, so Harden beat his record by double the amount.

Harden is one of the most skilled players but that wasn’t always the case.

It’s crazy to think that a man who destroys NBA defenses for a living once failed to average 10 points a game. During his rookie year with the Oklahoma City Thunder, he averaged 9.9 points per game.

Harden eventually showed great growth with The Thunder and went on to win the 6MOTY award for his excellent play off the bench in 2012. But, shortly after The Thunder with a core of Serge Ibaka, Kevin Durant, Russell Westbrook, and James Harden lost the 2012 finals to Lebron and the Miami Heat, Harden was traded away to the Houston Rockets.

After Harden was traded to the Rockets he took his game to a different level. He made All-NBA first team within 2 years of joining the Rockets. He even went on to win the MVP award with them. Over his 9 year tenure with the Rockets, Harden along with a good supporting cast made repeated attempts to win the NBA championship. Then, when the Rockets failed to make anything happen despite adding Chris Paul to the roster they decided to blow it all up. Harden was then traded to the Brooklyn Nets.

The Houston Rockets are currently 33-1 when James Harden, Chris Paul and Clint Capela all play together. 🚀 pic.twitter.com/cLuQKJZYLh

Harden reunited with his old Thunder teammate Kevin Durant and Kyrie Irving in Brooklyn. What looked like a fearsome super-team on paper achieved nothing on the court. After just a year on the Nets, Harden was traded to the Philadelphia 76ers in exchange for Ben Simmons.

Then there’s people that question his desire to win and call him a selfish teammate pic.twitter.com/6JGcUTRBeP

Now, Harden has recently opted to take a pay cut to maximize the team’s chances of building a championship roster. The Beard has just finished year 13 of his NBA career.  After multiple failed attempts to win a championship, he has found himself on his 4th NBA team. He is ready and willing to go the extra mile for that ring. It will be interesting to see whether Joel Embiid and James Harden will be able to lead the 76ers to NBA immortality or not.