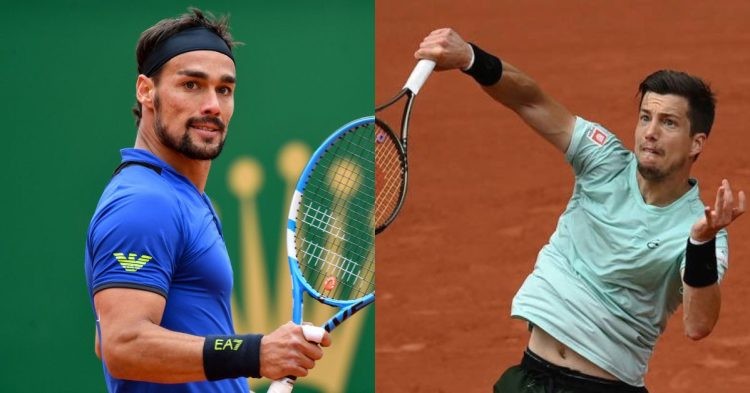 Fabio Fognini is one of the controversial tennis stars of this generation. He has rubbed the wrong way with many players and it has led to multiple quarrels and controversies. He is currently playing at the Hamburg European Open and faced Aljaz Bedene in his latest match.

Even at the age of 35. the Italian showed no signs of slowing down and beat Bedene 6-3, 3-6, 7-6 (5). Moreover, it also marked the 400th win of his professional tennis career. Many would argue that Fognini should have enjoyed a better career if not for his attitude and controversies.

His 400th win was the perfect way to summarize his career so far. After the match got over, Fognini and Bedene got into an argument that lasted for several minutes. The camera couldn’t catch watch the fight was all about. At one point, the two walked back to the court and started pointing to the ground. It was probably about Bedene’s serve in the tiebreak.

After the handshake, things really heated up between Fognini and Bedene. As per Tennis.com, it came to a point where the two were standing very close to each other. It could have led to a physical altercation but thankfully that didn’t happen.

The chair umpire of the match sensed that the argument between the two could turn into something bigger. That’s when she came down from the chair and tried to cool things off. She tried her best to push them away but it was all in vain.

The Slovenian accused the Italian of showing wrong marks to be checked to win points.pic.twitter.com/cDa5w9SuGx

Fognini has fought with multiple players in the past. The most famous was at the Shanghai Masters in 2019 against Andy Murray. During one of the rallies, Murray hit a volley and Fognini tried to distract him through yelling.

During the press conference, Murray said, “I looked in the direction of where the noise came from, and he then told me, ‘Stop looking at me; what are you looking at me for?’” If not for such silly controversies, Fognini could have ended up as the next big thing in tennis.