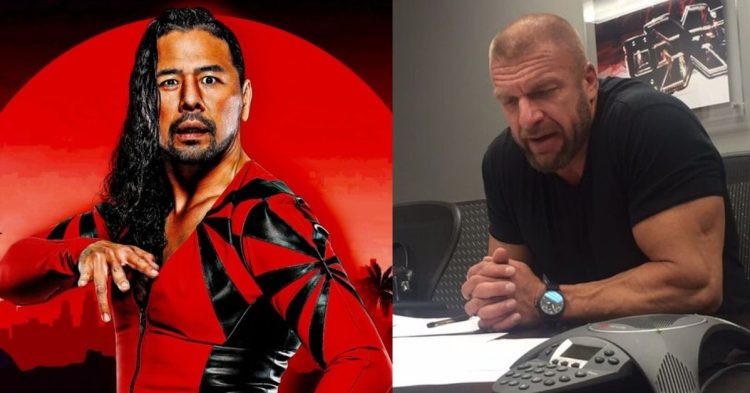 Shinsuke Nakamura has been known as the King of Strong style wrestling since his days in NJPW. When he made his debut in WWE NXT he made sure the US audience knows him and he indeed left a mark on them. After his main roster call-up, Shinsuke has seen a lot many ups and downs. From winning US and Incontinental titles and having feuds with the likes of John Cena, and AJ Styles, he slid down to mid-cards.

To be honest his main roster run hasn’t exactly been spectacular. Surprisingly, Nakamura has never captured a world championship and has spent the majority of his career as a regular mid-carder. Fortunately for his supporters, Triple H now has full creative authority and might try to promote the former NXT Champion.

After seeing how the NXT “Black and Gold” superstars like Johnny Gargano, Ciampa, Kevin Owens, and many more have been pushed into the main roster, fans have faith that HHH will restore Shinsuke. Everyone loved Shinsuke’s gimmick and his wrestling style was unique within the WWE. Fans have started a campaign to urge papa h to bring back Shinsuke stronger.

Shinsuke Nakamura’s surprising heel turn at WrestleMania 34 won’t soon be forgotten by the audience. The issue was that the shift wasn’t handled well, and the consequences didn’t help him. The worst part was that his shenanigans fell short of helping him win the WWE Championship, making his heel turn pointless. Although his work as a heel was appreciated maybe another heel turn could make him a legit threat again.

2. Dethrone Gunther for the IC title

Despite becoming a two-time Intercontinental Champion, Shinsuke Nakamura’s reigns were not truly remarkable. At Extreme Rules 2019, he first defeated Finn Balor on the pre-show to win the title. He defeated Apollo Crews for the IC Championship once more in August 2021. Gunther, the reigning champion, has elevated the championship with his impressive run. Dethroning him would solidify Shinsuke’s character and bring back his glory.

The “Guy” to beat is Roman Reigns, who is perhaps the biggest name in sports entertainment right now. Nakamura stopped The Head of The Table on the first SmackDown following WrestleMania 38, but The Usos responded with a Double Superkick. Shinsuke Nakamura attacked Reigns in backstage interviews, but WWE never followed up on the angle. Feuding with Roman could elevate Nakamura and they could deliver some good matches too.