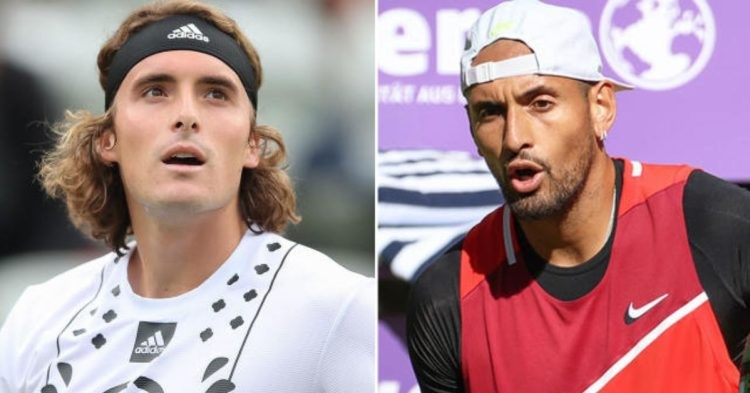 Nick Kyrgios and Stefanos Tsitsipas played the most entertaining game of Wimbledon so far. The match had quality tennis but that is not what elevated the entertainment quotient of the match. Things between the two heated up and ended in a lot of banter.

As the match neared its end, all the online viewers were waiting for the handshake between the two players. However, just when it was about to happen, the camera was cut to some other shot. The fans were left disappointed to not capture that moment live on screen.

Whole world was waiting for the #handshake and they ruined it in the end!!🙁

But #Kyrgios made it all worth. Don’t know how he is able to do it.. #Wimbeldon2022 #Wimbeldon#Tsitsipas @NickKyrgios https://t.co/FspBYw6Gid

Deciding against showing the handshake between Stefanos Tsitsipas and Nick Kyrgios has to be the worst possible thing you could do as a broadcaster.

“We were all just here for the handshake!” 😱

As the contentious third-round #Wimbledon match between @StefTsitsipas and @NickKyrgios drew to a close, producers had just one job.

After a lot of waiting, one Twitter user finally managed to get a clip of the handshake. However, the handshake looked pretty normal as if there was no animosity between the two players. It was the least dramatic thing about that match.

What is the drama that happened between Nick Kyrgios and Stefanos Tsitsipas ?

The match between the two was already high on intensity when something happened in the match. Tsitsipas hit the ball in the stands out of frustration but luckily did not hit any spectators. However, that did not bode well with Kyrgios.

Things are getting TENSE (Stef hit it out btw)#Wimbledon pic.twitter.com/2TAK0MuzdH

Kyrgios immediately approached the umpire to default Tsitsipas. Last year, Novak Djokovic hit one of the line umpires unintentionally and his match got over then and there. Kyrgios cited the same example and asked for a similar consequence.

After this point, the drama only went up. Kyrgios constantly started swearing and confronting the chair umpire. At one point, Tsitsipas approached the umpire and said that the Aussie had “zero respect for the game, zero respect for his opponent.”

Kyrgios eventually came on top and won the game against Tsitsipas. After losing the first set on a tiebreak, Kyrgios won the next three sets to win the match. With this, he has now reached the pre-quarterfinal of the tournament. If he plays like this, he may face Nadal in the semifinal.