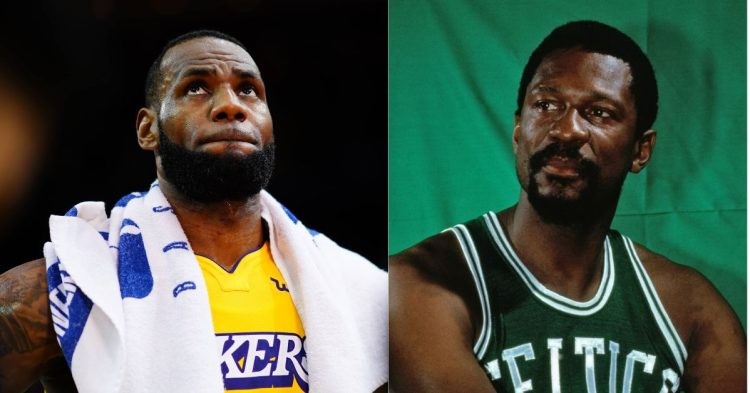 LeBron James is perhaps one of the most talked about athletes in the entire sports world. He is a 4x NBA champion and has been in the league for 20 years. NBA critics and fans always look to compare King James to his predecessors in the sport of basketball. Whether it is Michael Jordan or Kareem Abdul Jabbar.

NBA legend Bill Russell’s jersey #6 is to be retired by the entire league. This is in a way, to pay homage to the departed soul and show a sincere form of respect. However, for a somewhat amusing reason, the people on the internet have taken shots at the King.

One must wonder how LeBron James and his legacy are connected to honoring the 11x NBA champion Bill Russell. Thus, we should look closely into what the whole fuss is all about.

The number on a jersey has significant importance in the NBA. More than anything, it is a sign of identity and association. This means a team would not appreciate a new player wearing the same number as a previous legend from the same team. It is just a matter of respecting the players of the past and choosing a new number if need be.

The NBA will retire the No. 6 league-wide honoring the late, legendary player and activist Bill Russell.

LeBron James was a big Michael Jordan fan even before he entered the league. Therefore, he decided to wear the same jersey number that MJ did (#23). He wore the same number until he left for the Miami Heat in 2010. A player’s number is also something like a tattoo. Changing it could signify a transformation of some form. We all know Kobe Bryant wore both #8 and #24 throughout his entire career.

The same way LeBron wore #6 when he was with Miami. He switched back to #23 when he returned to the Cavs in 2014. However, he has changed it again recently back to #6. This creates a somewhat awkward situation. If Russell’s jersey is retired league-wide, every time King James looks to the rafters, he will see Bill Russell’s name with the number LeBron is currently wearing.