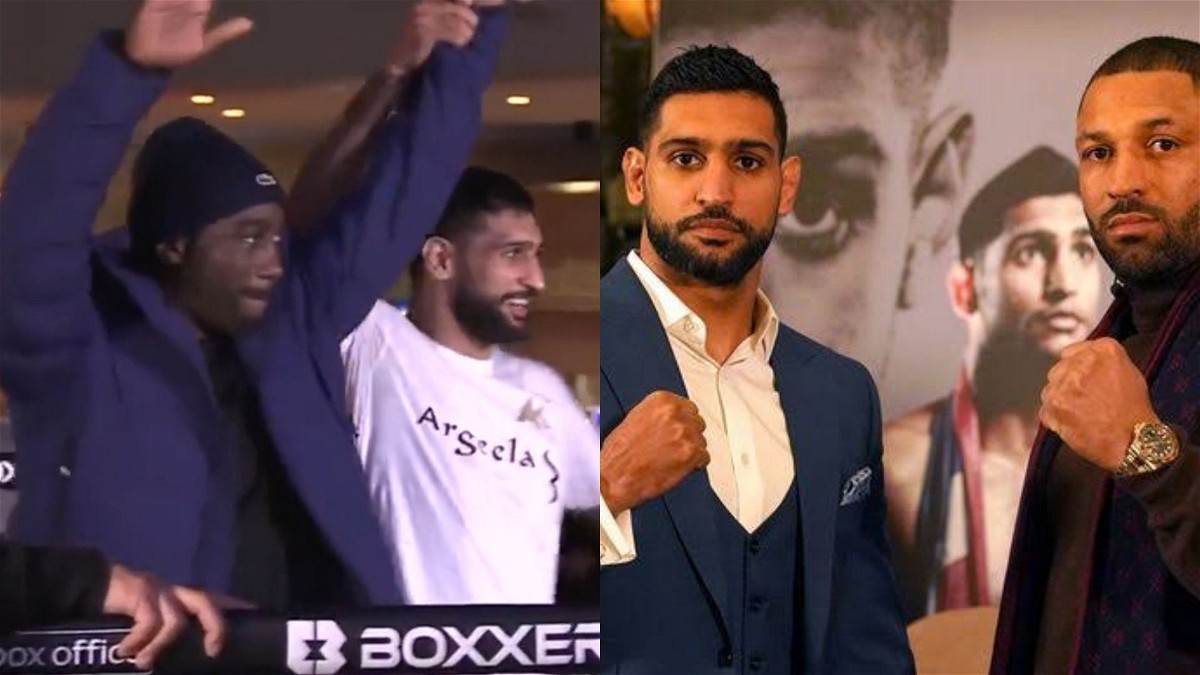 Amir Khan will go head to head against his long time rival Kell Brook in a grudge match this weekend at the AO Arena in Manchester. Consequently, fans are highly excited as King Khan makes his return inside the ring after a lengthy gap of almost three years from the sport.

As we head closer to this fight, both Amir and Brook are promoting the bout by giving interviews and sharing their thoughts about each other. It is needless to say that there is a lot of animosity between the two fighters during this build-up because of their long history. Therefore fans cannot wait to see these two British boxers collide against each other.

Ahead of their much-anticipated showdown, King Khan and The Special One took part in an open workout at Manchester’s Trafford Centre. During the workout, Amir welcomed the current WBO welterweight champion, Terence Crawford, inside the ring. As soon as Bud stepped inside the ring, the crowd present in the training centre erupted.

Amir Khan brings Terence Crawford into the ring at his open workout ahead of the Kell Brook fight, and the pound-for-pound star gets a great reception from the UK fans…

Amir Khan has been training with Crawford at the welterweight champion’s gym in Colorado for this upcoming fight against Kell Brook. It is needless to say that Terence Crawford’s guidance for the 35-year-old British boxer for this fight would be very valuable. Because Bud handed Kell Brook a brutal KO/TKO loss in their meeting in 2020 and his tips could help Amir gain a significant edge in this fight.

Terence Crawford has faced both Amir Khan and Kell Brook and he has successfully defeated both these British boxers in a violent fashion. Interestingly, as mentioned above Amir Khan has joined forces with Crawford’s trainer Brian ‘Bomac’ McIntyre. Consequently, the WBO welterweight champion who was present at the open workouts of the Khan vs Brook fight gave an interview to Sky Sports. While having a conversation, he spoke about their rivalry and also shared his insights about Kell and Amir.

Thereafter the interviewer asked Crawford for his predictions for this super showdown. The American boxer predicted that King Khan will edge past the Special One this weekend.

“I think it’s going to be a great fight. You know I think Brook is very talented. I think he’s still got a lot left in a tank. But I gotta give the edge to Khan because I was witnessing how hard he was training. I was witnessing watching him spar and seeing him progress and progress each week. I see the hunger in his eyes.”

Terence Crawford has given his predictions for this bout and indeed one can expect this bout to be a barn burner. Do let us know in the comments section who you think will win this grudge match between Amir Khan and Kell Brook.

“What Did He Do?”- Israel Adesanya Shuts Down Fans Claiming Robert Whittaker Won Rematch at UFC 271