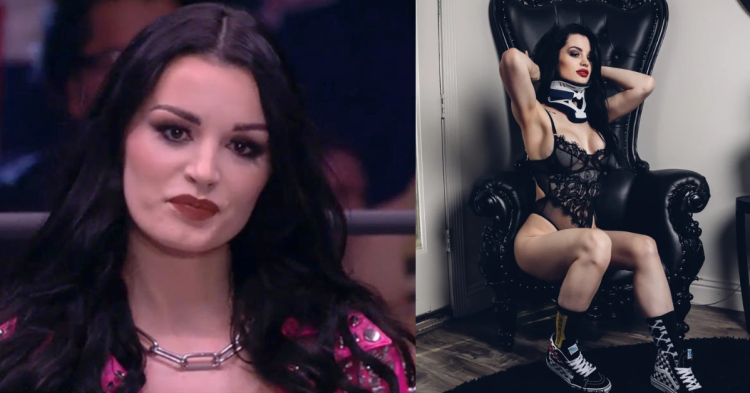 Saraya-Jade Bevis, also known as Paige made her shocking appearance at AEW Dynamite Grand Slam in New York on Wednesday.

After suffering a severe neck injury during a live event, Saraya-Jade Bevis, also known as Paige, was forced to pull out from the in-ring competition in April 2018. After her contract with the company expired in June 2022, she revealed that she wouldn’t be resigning.

There have been speculations that Paige was cleared to wrestle again but WWE doctors didn’t and stopped her from an in-ring return. Although she was under a contract with WWE she didn’t want to resign and wanted to explore more options. AEW is known to have conversations with Ex-WWE Superstars and often sign them too.

Many reports state that AEW and WWE contacted Paige on multiple occasions. Although nothing has been confirmed it is speculated that she has signed an agreement with the AEW and would make an appearance soon.

Saraya-Jade Bevis, also known as Paige made her shocking appearance at AEW Dynamite Grand Slam in New York on Wednesday. After Toni Storm defeated Dr. Brit Baker for the AEW Women Championship, Brit Baker along with Sarena Deeb and Jamie Hayter assaulted Toni. Surprisingly Paige now known as Saraya made a shocking entrance with the aid of Toni Storm.

There were rumors suggesting that Paige might have already signed a deal with Tony’s AEW, although it is uncleared whether Paige will be a Competing member of the Roaster or would just have a manager-type role in AEW.

Saraya was considered one of the hottest free agents in women’s wrestling after she declared that she won’t be signing a new deal with the WWE.

After Triple H, took over the creative control in WWE, many Superstars have returned to the WWE including the likes of Karrion Kross, Dexter Lumis, and many more. Paige was thought to be one of the returns to the company keeping in mind that she was still so over among the WWE universe. Surprising as it seems Saraya decided to shake hands with the other Khan at AEW. Let’s see how AEW books Paige and how they involve her in a storyline with an already jam-packed Roaster in AEW.

Welcome to @AEW! @Saraya is ALL ELITE!

Thank you to everyone watching #AEWDynamite Grand Slam TONIGHT! pic.twitter.com/8DUePoOsar