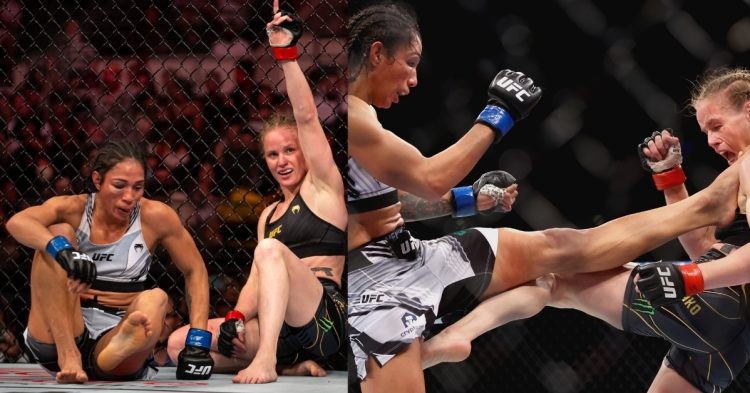 UFC women’s flyweight champion Valentina Shevchenko was in action against Taila Santos in a five-round bout in the co-main event of UFC 275. Going into this fight, Bullet had the opportunity to break Ronda Rousey’s record of most successful title defenses.

After five rounds of intense battle between these two flyweights, Shevchenko came out on top as she won the fight via split decision. This was unarguably the toughest title defense of Bullet as Santos attempted a couple of submissions and almost won the fight.

But the flyweight champion made a brilliant comeback in the championship rounds to defend her title for a record-breaking seventh time.

In the first round, Valentina. Shevchenko managed to land some good strikes and held Santos in the clinch. But the Brazilian contender outsmarted Bullet and landed a takedown late in the first round and took the back of the champion. She almost locked in the rear-naked choke and finished the fight in the final two minutes. However, Valentina showed great defense and survived the submission attempt.

Santos carried the same momentum in the second round and controlled Shevchenko for almost two minutes on the ground. The title contender showed impressive takedown defense and countered the champion’s attempts of taking her down. After losing the first two rounds, Bullet landed some good strikes from the outside and it looked like Shevchenko had the third round in the bag.

But the third round ended with a similar story as Santos got into a great position on the ground and locked in a rear-naked choke. However, the flyweight champion showed great composure and skill to get out of the submission.

An unfortunate collision of heads in the fourth round caused swelling to the eye of the Brazilian flyweight. Thereafter the momentum of the fight shifted towards Shevchenko as she landed some nasty blows and won the fourth round.

Similarly, in the fifth round, Valentina dominated with her striking and later controlled Santos on the ground throughout the entirety of the final round. After the result, many fans were shocked as they believed Santos had done enough to win the title.

Talia Santos was definitely robbed. There’s no way that there should have been a 49-46 round. I could accept a draw at best.

It turns out that you need to be the poster girl of the UFC, be in movies, have a clash of heads shut Santos’ eye completely for half the fight and receive a bullshit decision to beat Talia Santos.

This fight could have gone either way as the first round was very unclear with both fighters dominating respectively. Nonetheless, it was an exciting matchup and we could see them clash once again in future.