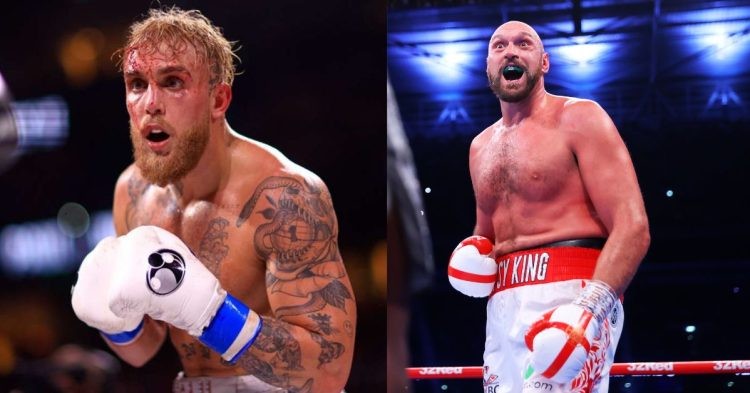 ‘The Problem Child’ Jake Paul is scheduled to fight ‘The Spider’ Anderson Silva on October 29th. The eight round bout will take place at the Desert Diamond Arena in Glendale, Arizona.

Now, just six days ahead of the biggest fight of his career Paul has jokingly called out the current heavyweight King, Tyson Fury. In a humorous spoof video, Paul dawned a fat body suit and said “Ever since I moved up to the heavyweight division, Tyson Fury has been real quiet. “Tyson Fury, where the f**k you at, p****y?”.

Paul also wrote, “In 6 days I fight Anderson Silva in #paulsilva but, after that, fat Jake is moving up to the heavyweight division to fight my brotha from anotha [email protected]_Fury.” Worth mentioning that Paul was previously scheduled to fight a member of the Fury family but Tommy Fury (Tyson’s younger brother) was forced to pull out from the bout due to some visa issues that prevented him from entering America.

YouTuber turned boxer Jake Paul was last seen inside the boxing ring in December last year when he fought former UFC Welterweight champion, Tyron Woodley for the second time. Paul won that fight in phenomenal fashion by Knocking out Woodley with one punch in the sixth round. Apart from all the shenanigans Paul does, there is no doubt that he has drastically improved as a boxer and this fight against Silva could be a much closer contest than many think.

How would Jake Paul match up against Anderson Silva?

Fighting Anderson Silva is certainly a massive step up in competition for Paul as unlike his previous opponents, Silva has some real experience inside the boxing ring. MMA legend Anderson Silva has previously boxed 4 times and has defeated former WBC middleweight champ Julio Cesar Chavez Jr. and Tito Ortiz. Also unlike Paul’s precious opponents, Silva is considered to be on of the best strikers to ever step inside the octagon.

As mentioned earlier, Paul has significantly improved his striking and certainly has the skills to beat a 47 year old retired MMA fighter. “Knockout of the year incoming,” Paul can be heard saying in part of the training footage released by him. “Yeah I’ve seen this a bunch of times and every time I see it I just find more openings. He loves to get in that corner and dance – I’m not going to play that s***, it’s my ring, it’s my fight, I’m the A-Side for a reason – he’s not going to come in there and do that s***, I’m not going to feed into it.”

If Jake Paul can pull of a massive upset by defeating Anderson Silva on October 29th he will certainly get his long-due respect from fight fans around the world that till date consider him to be a Disney or YouTube kid.