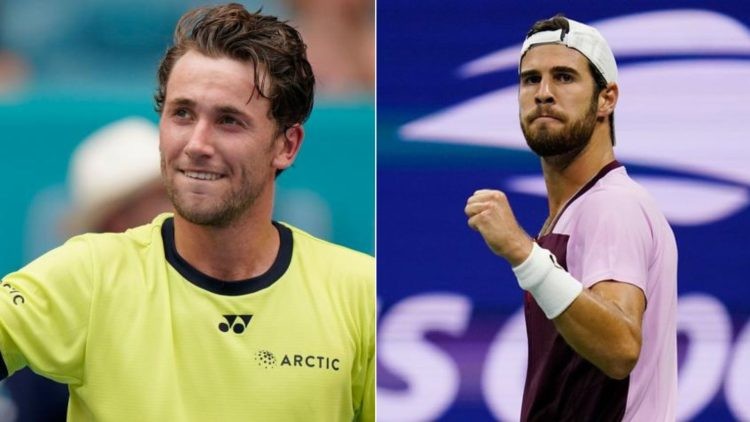 Casper Rudd defeated the Russian tennis star Karen Khachanov 7-6(5), 6-2, 5-7, 6-2 in the US Open semifinals. With this win, Casper has secured his slot in the US Open finals for the first time. Rudd had previously played the Rolland Garros finals against Rafael Nadal.

Casper will be facing the Spaniard Carlos Alcaraz in the final match of the US Open. Casper is currently enjoying the form of his life and in the press conference he stated,

“This match today was another great match from my side,”

“I think we were both a bit nervous at the beginning, a few breaks back and forth. But you have to take into account that this match is probably the biggest in both of our careers. Of course, there will also be some nerves but I was fortunate to win that first set, which calmed my nerves a little bit.”

Rudd lost his maiden grand slam final against Rafa and he would be hoping to gain some sort of redemption by defeating Carlos Alcaraz on Sunday.

Casper Rudd to fight for his maiden Grand Slam title

Casper has a lot at stake in the ongoing US Open title. He would not only win his maiden grand slam title but also be the first Norwegian player to reach the No.1 rank on the ATP rank list.

Rudd was impressed by his performance against Karen and felt that he improved his performance second set onwards, however, Karen tried to make a comeback in the third set.

He’s into the final in his 5th try. 👏 pic.twitter.com/QpTZJtyBrq

He was disappointed during Rolland Garros since he felt that it could be the last final appearance of his career, however, that was not the case since he rose to the occasion and reached the US Open finals as well.

This is Casper’s best performance so far in the US Open since he has not qualified for more than three rounds in the US Open. In order to win the match and nullify Karen’s strong serve, Rudd displayed fabulous movement in order to clinch the final spot.