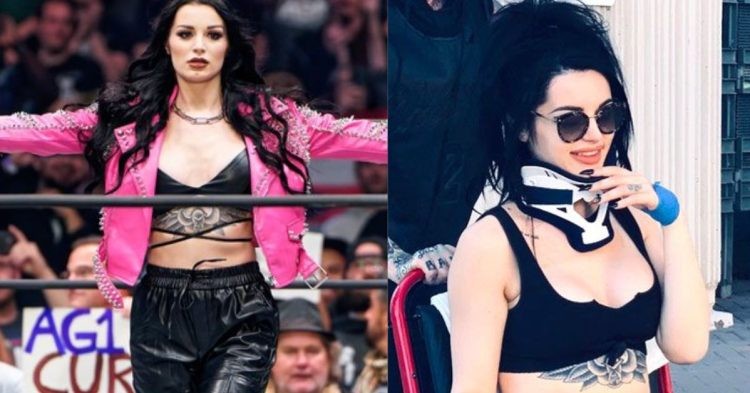 On the Grand Slam episode of AEW Dynamite last month, Saraya made her AEW debut. Although she stopped competing in in-ring matches in 2018, there were concerns regarding her position inside the company. Paige’s wrestling career ended in 2017 while she was a wrestler for the WWE.

The former Paige has been given a go by AEW Dr. Michael Sampson to restart wrestling, according to a recent article from the Wrestling Observer Newsletter. After many rumors that Saraya had joined AEW, but it was unclear whether she would ever have the privilege to wrestle, Meltzer finally confirmed it. Saraya was retired before coming out of retirement and making an appearance on AEW television a few weeks ago. She had dealt with some extremely serious injury concerns that put her in-ring career in jeopardy. It was mentioned that she might need to be used by AEW in a restricted capacity and possibly as a manager. She seemed ready to compete on Wednesday based on her physicality.

It is said that Dr. Sampson, who formerly performed a similar job for WWE, would look out for the performers’ well-being. If he had not thought it safe to do so, he would not have cleared her.

.@Saraya Has Something to Prove; @willowwrestles Gets the Pin | #AEWDynamite 3-Year Anniversary Show
▶️ https://t.co/vXlkozHcFC pic.twitter.com/rcifPqEq0y

Will Saraya shine in AEW?

The women’s division appeared to be static up to Grand Slam. Tony Khan blew the chance to set Jamie Hayter against Britt Baker in a fight. It’s uncertain at this point whether Toni Storm is prepared to take on the role of the division’s champion. Thunder Rosa’s push for the championship felt simply flat.

Saraya’s ability to compete has the potential to significantly alter how the AEW Women’s Division appears. Fans have long acknowledged that the area needs improvement, and Saraya is a significant addition to the lineup. If she competes and eventually wins the championship, it will elevate that division to a level it hasn’t reached since AEW’s founding more than three years ago.

The women’s division in AEW is perhaps front and center for the very first time, and everyone is buzzing about it. If Tony Khan is clever, he will capture that energy and use it to his advantage on Dynamite the following Wednesday. Not a plot that starts and stops. Not on every third episode of Rampage. Every week, there is something consistent and prominent in the programming. Both Saraya and AEW are thrilled about this. Just let’s wish that she remains healthy and her past injuries don’t haunt her in the future.