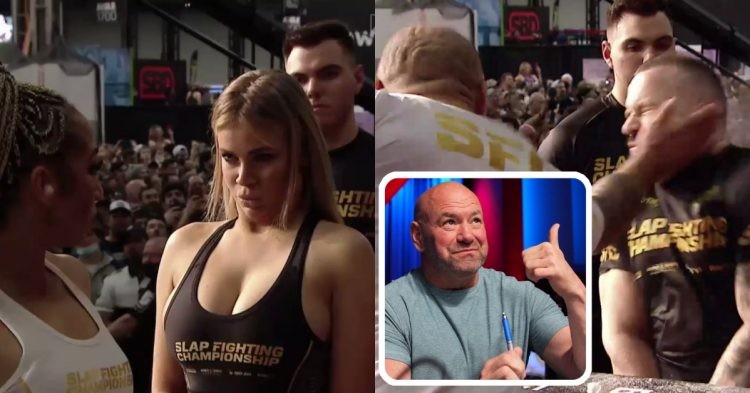 Dana White is always looking for interesting business ideas to explore. He is one of the main reasons why The Ultimate Fighting Championship (UFC) is a global phenomenon and selling out arenas all over the world! It looks like Dana has finally found his next big idea and it is not what the fans may expect from him.

The UFC President was a big fan of boxing growing up. Hence, he wanted to establish his own boxing promotion under the banner of ZUFFA. However, that did not end up happening. But Dana has found an alternative to boxing as reports suggest, he may soon be hosting a slap fighting event in Las Vegas.

MMA Junkie is reporting that Schiaffo LLC, managed by Dana and the former UFC owner Lorenzo Fertitta, has demanded clarification from the Nevada Athletic Commission, on the matter of whether slap fighting can be regulated by the commission or not. It may not come as a surprise to many fans who follow Dana White on Instagram.

Recently, in an Instagram video, Dana White announced that he will host a slap-fighting competition and provided an e-mail address for the willing participants to send their audition tapes.

The Top 5 slap fighters that Dana White could bring in

Slap fighting is a relatively new form of combat sport. The fans recently saw the rise of Karate Combat, so there is no reason why slap fights can not garner the same attention. As a matter of fact, two famous celebrities already have tried out their hand at it and have found big success. Elder brother of Jake Paul, Logan Paul and famous Hollywood action hero Arnold Schwarzenegger.

They have previously hosted Slap Fighting Championship events which have generated millions of views on YouTube. The events looked like they also had decent live attendance as well. Hence, Dana would be hoping to have the same kind of success if not more! There are big names in the industry who can certainly pull in those kinds of numbers.

The 2022 Arnold Classic Slap Fighting Championship featured five bouts on its card. While three fights went to the judges;’ cards, the top two fights ended in 3rd and 1st round knockout respectively. The winners were Dawid ‘Zales’ Zalewski, Maksymilian Lesniak, Adrianna Sledz, Mateusz Karek and Pater Truchlik. Including them would mean that Dana’s competition will have a lot of carryover fans. (Results via Fitness Volt).

It is a fairly simple sport in which one opponent trying knock out the other with a slap. It is not as complicated as Mixed Martial Arts (MMA) or boxing. If marketed properly it can reach tremendous heights and Dana White is certainly capable of doing so.

Did Islam Makhachev Get Injured During His Training Camp for Charles Oliveira Title Fight at UFC 280?