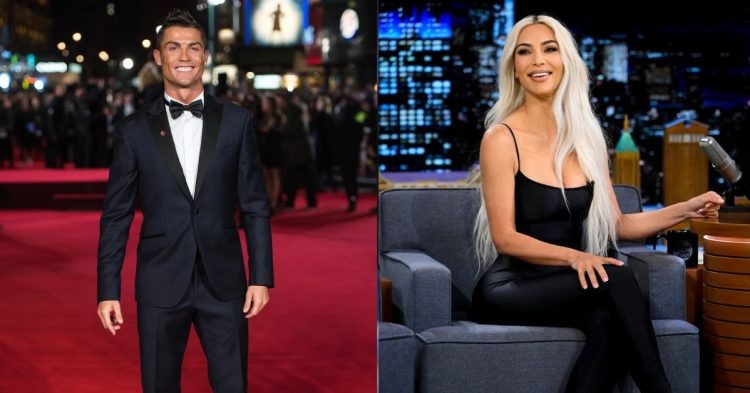 As he ascended the ranks of the beautiful game, Cristiano Ronaldo was linked to several gorgeous ladies, including dates with celebrities like Paris Hilton, Kim Kardashian, and model Irina Shayk. However, those days have long passed, as Ronaldo is now happy with 28-year-old model Georgina Rodriguez.

Given that these two have millions of fans, it is still a mystery how Cristiano Ronaldo and Kim Kardashian met. Before their fling, Ronaldo tended a brief relationship with Paris Hilton – a former friend of Kardashian. Perhaps that might answer how they met.

Kim Kardashian and Cristiano Ronaldo appeared to be more than just buddies. The American celebrity is famous in Hollywood and is the star of the TV series ‘The Kardashians.’ Per one report, Kardashian was spotted kissing Ronaldo in Spain in 2010.

According to Mail Online, which references The Sun, Kim K was seen kissing the former Real Madrid player after a match. Moreover, the report said that Kardashian boarded a chauffeur-driven vehicle that silently followed Ronaldo’s vehicle back to his city residence, where she remained for around four hours. The same car took her to the airport the next day.

When asked if she had dated Cristiano Ronaldo in a Ryan Seacrest YouTube video, she said: “No.” Kim smiled and blushed. “Next question! And we are simply friends,” she replied. Have you ever considered kissing Cristiano Ronaldo, Ryan further inquired. She responded: “I have thought about a lot of things.”

Assumptions of MY Cristiano Ronaldo dating Kim Kardashian.Last seen on a date in Madrid… No hell no this must be another nightmare!!!!

Ronaldo and Kim K reportedly parted ways soon after. Since 2016, Cristiano Ronaldo has been dating Georgina, while Kanye West and Pete Davidson have been Kardashian’s romantic partners since the interview. It is worth noting that she has since cut off ties with both of them as of the time of writing this article.

A fan believed that “Ronaldo is incomparable to any of the Hollywood. Nobody has got a personality as good as Cristiano and She didn’t deserve Cristiano. He is too good for her and far better looking than all the guys she’s dated so far.”

Some people even had trouble matching the personalities of these two because they were so dissimilar. The number of fans that both of the superstars had was probably the only thing they had in common.

It is believed that in 2010, Cristiano was unable to speak English. Therefore, communication between the American and the soccer star would have been difficult.

I can’t believe Cristiano Ronaldo is dating Kim Kardashian. He could do so much better…