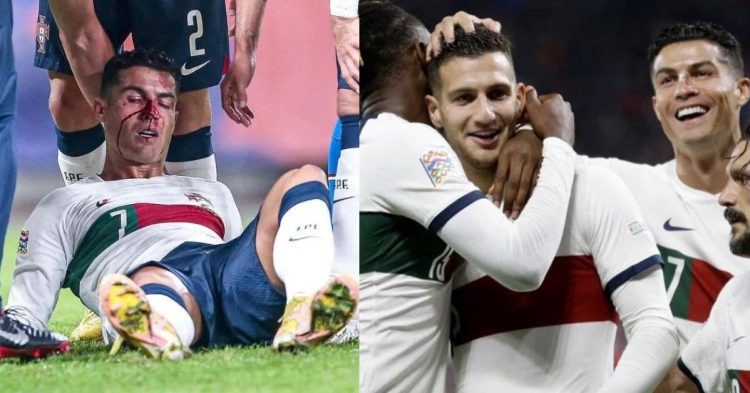 The first and only international break before the World Cup brought injury concerns to clubs all over Europe. Yesterday saw Portugal take on the Czech Republic in a 4-0 win at the Fortuna Arena in Czechia. Manchester United players Cristiano Ronaldo, Diogo Dalot, and Bruno Fernandes made all the headlines of the game.

Cristiano Ronaldo appeared to have his nose broken and later registered an assist for Portugal. Diogo Dalot scored 2 goals including a long-range screamer. Bruno Fernandes also managed to register himself on the score-sheet.

How did Cristiano Ronaldo get injured?

Chasing after a loose lobbed pass into the opposition’s penalty box, Ronaldo collided with the Czechia goalkeeper. Ronaldo’s collision with Vaclik meant the Portuguese had to receive immediate treatment on the pitch. Thankfully for Manchester United and Portugal fans, the injury did not seem very serious. Ronaldo continued to play the whole 90 minutes and even registered an assist.

One of the greatest International performances of all time

Got a severe blow to his nose but got up and dropped a masterclass to take his team top of the Nations League group. 🐐 pic.twitter.com/14cy1WVzGl

Cristiano Ronaldo has had a poor start to the season domestically. He has failed to score or assist in the Premier League. In 2 starts. In the Europa League, the Portuguese registered one goal from a penalty against Sheriff. The international break has come at a good time for him. He played a good game as well despite conceding a penalty which Schick blazed over the crossbar. He assisted via a header for Portugal’s 4th goal scored by Diogo Jota.

Portugal and the Czech Republic faced off in an all-important match in the UEFA Nations League. Diogo Dalot played arguably his best match in a Portugal shirt, earning high praise from fans. He was in the right position having made a darting run towards to box, to turn in Rafael Leão’s pull-back cross. He then scored a left-footed long-range screamer in the second half.

Speaking after the game Dalot said, “It’s a unique feeling to be able to help my country. We knew it could be a difficult game if we hadn’t started with the right attitude.”

“We started the game very well, controlling the ball, and after the goals, the spaces started to open up a little… Congratulations to everyone, we really deserved this victory and now it’s time to recharge our batteries.

Bruno Fernandes bossed the mid-field and turned home Mario Rui’s cross. Ronaldo then directed Fernandes’ corner goalward, and Dalot diverted it past the keeper to round off a dominant Portuguese display.
With the international break come injuries.

When Ronaldo was on the ground receiving treatment many Manchester United fans were cursing the international break. Thankfully the injury was not very severe and Ronaldo continued playing. He will, in all likelihood barring another injury scare in the next match, be available in the Manchester derby.