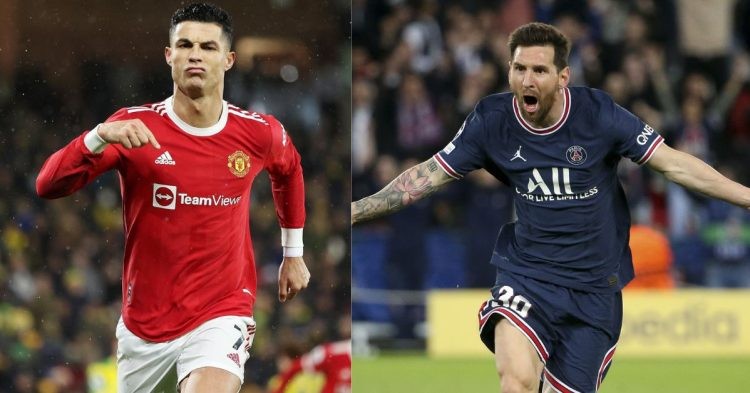 The beautiful game has existed for many years. There have been many players who have announced themselves to the world and went. But there are two players who have the most impact in all of sports, not just football. It is none other than Cristiano Ronaldo and Lionel Messi.

Ronaldo and Messi have been at the top for decades now. They both started their careers during the early 2000s and have worked up their way to become the best athletes the world has ever scene. Although there have been many arguments on who is better than the other, let’s use the numbers to determine who has the edge.

Let’s take a look at which player has the most goals currently. As we all know, Cristiano is the top scorer in football history. He has scored 816 goals in 1130 games till date for Sporting CP, Manchester United, Real Madrid, Juventus, and the Portugal National Team. On the other hand, Lionel Messi has 775 goals in 985 games, according to Transfermarkt. This means that Ronaldo is better than Messi in scoring goals.

Many may immediately think that CR7 is the better player since he has scored more goals but it doesn’t seem like the case here. Ronaldo has played a significant number of games more than his former La Liga rival. To be exact, he has featured in 145 more games than Messi. That isn’t that much of a surprise considering Ronaldo’s age.

Apart from goals, we can also use another stat to determine who is better. Ronaldo finds the back of the net every 112 minutes, and Messi does so every 104 minutes. Although these may seem like normal numbers, its not something players put up regularly. These two have done it for almost 20 years.

Since the start of his career, Messi has always been more of a playmaker than a goal-scorer. When Pep Guardiola first started with Barcelona, Messi featured for the team in a false 9 role, where he was making spaces for other attacking players. Since then, Messi has done the same throughout his career with different teams. He has 339 assists in all competitions for Barcelona, PSG and the Argentina National Team.

On the other hand, Ronaldo has also been pretty decent in terms of assists. Despite becoming an outright goal-poacher in recent years, he has still racked up the assists. The Man Utd no.7 has 230 assists across his career. Hence, Messi is better in terms of assists. The interesting point is that Messi has more assists despite playing lesser games than CR7. However, their playstyles explain that difference.

Ronaldo used to be a midfielder when he started off his career with Man Utd in 2003, and continued to be the same for a few years. It was at Real Madrid when he realized he would be a lot more dangerous in the box rather than outside it.

Both these players have won a huge number of trophies. Messi has won 41/88 major titles in his career and Ronaldo boasts 34/92 titles won. Moreover, both CR7(32) and LM10 (39) have played in several finals of prestigious competitions. Let’s not also forget the fact that Ronaldo has 5 UEFA Champions League wins and Messi has 4.

There are many fans who claim Ronaldo is better than Messi, and the vice versa as well. But one thing we all have to take note is that each one of us find a player the best according to our preferences. Millions of fans find Messi as the GOAT because of how magical his plays are. Whereas the same number of fans think Ronaldo is better due to his volatile abilities in football.

In addition to that, no matter what the stats tell us, we will never see players like Messi and Ronaldo ever again. Many fans in the current day believe that Erling Haaland and Kylian Mbappe will become the next Ronaldo and Messi. However, the two GOATs brought billions of lovers to the sport and entertained all of us on the biggest stage in the world for 20 years. It is safe to say we will never witness these scenes again.