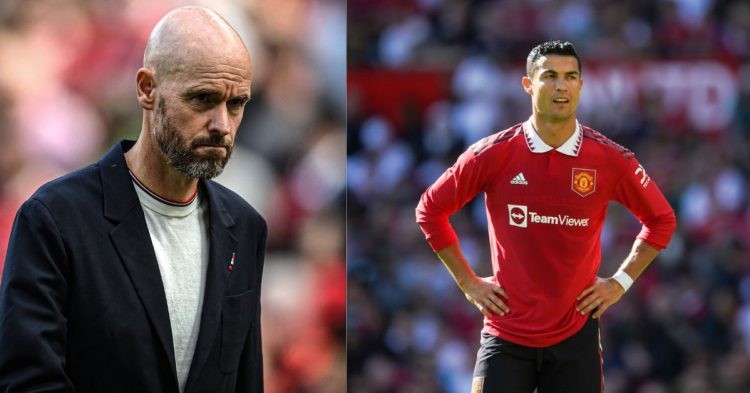 Manchester United are currently in the middle of a rebuild. After failing to qualify for the Champions League this after finishing 6th last season, they Dutch coach Erik ten Hag. He was managing AFC Ajax in Netherlands at the time. “The current situation is obviously not that good. It’s a big challenge,” ten Hag said in an interview with Man Utd.

Although he had never managed a club in the English Premier League, fans were still excited for his arrival. They were intrigued to see the type of impact he could make on the club with Cristiano Ronaldo also on the team. However, he also had more work to do. ten Hag had eyes on many signings to replace the old United players.

He started off well at Man Utd when he signed Tyrell Malacia from Feyenoord. After that, Manchester United signed Lisandro Martinez, Christian Eriksen, Antony, and 5x UCL champion Casemiro. Ronaldo won 4 UCLs together with Casemiro at Real Madrid, including a three-peat. However, the situation was different this time around.

During the summer when Manchester United were strengthening their team, rumors on Ronaldo leaving emerged. Since the English club did not qualify for the UCL this season, reports mentioned that he wanted to leave. After all, he is Mr. Champions League. After winning 5 with Real Madrid and United in 2008, it seemed like he still had high ambitions.

Despite having over 800 goals in his career, teams started to reject CR7. One of the teams that said no to him was Chelsea, when former head coach Thomas Tuchel did not want him at Stamford Bridge. In addition to that, European clubs like Bayern, and Napoli also rejected the football legend. The reason why these clubs said no to him would be his age.

Ronaldo is currently 37 years old. He may still bag goals left, right and center, but we all know he isn’t the player he once was. Man Utd have an enormous amount of pace in their attack this season. With Marcus Rashford, Anthony Martial, Antony and Jadon Sancho, they have one of the fastest attacks in the world. That said, Ronaldo seemed to slow down the team’s attack at times.

Counterattacking is in Manchester United’s DNA. They may be shaky at the back sometimes, but they are still one of the deadliest teams when transitioning to attack. This was one of United’s biggest problems with Ronaldo. Against the bigger teams, who are well organized, Man Utd struggled to break down their team. Cristiano mainly plays the central role nowadays.

In the EPL, strikers have become playmakers at times as well. They come deep to collect the ball for the wingers to go up. Even Man City’s Erling Haaland does the same for them. It has become quite evident that Ronaldo is unable to do that at his age.

Ronaldo has played in all of United’s 6 league games. However, he has only featured in 207 minutes, which is less than 50% of the total minutes one can play. In the first two games against Brighton and Brentford, United lost. The worse game out of the two was the one against the latter, which 4-0 to The Bees. The Portuguese had started that game.

It got worse for him when ten Hag started benching him in the coming games. Against Liverpool, Southampton, Leicester and Arsenal, Ronaldo had to watch from the sidelines. The interesting point to note was that Man Utd won all these games, making it four wins in a row. It was the most successful run of games for the new manager. The results also brought another question to our minds? Do United need Ronaldo?

Ronaldo has only scored one goal in all competitions this season. It was against FC Sheriff in the Europa League. As many reports mention, it seems like Ronaldo will most likely stay through the January transfer window. However, the story might be different during the summer. His current Man Utd contract ends in June 2023. Since he hasn’t been able to impress ten Hag, will he look for another team?

We all know Ronaldo always picks up the pace during the middle of the season. It has been the case since his Madrid days. He may still shock the world with his goals as he usually does. However, if his form does not improve, his exit looks extremely likely.

“Second Round Drag Him to Deep Waters”- Islam Makhachev Reveals Exactly How He Will Beat Charles Oliveira, Predicts a 3rd Round Win