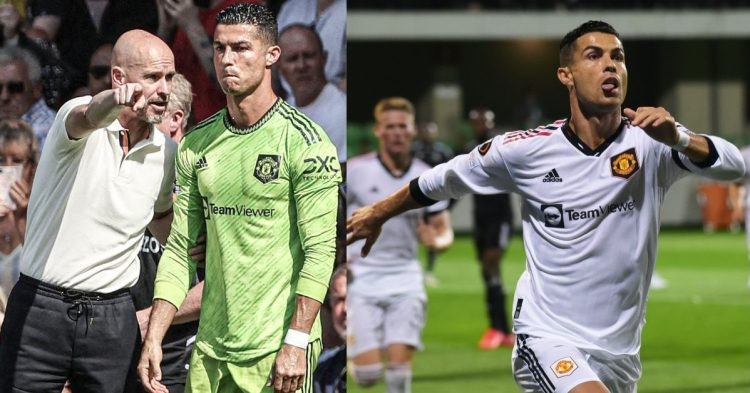 Cristiano Ronaldo is one of the biggest athletes of all time in all sports categories. When you are at the top like he is, you will always be in the spotlight. Ronaldo is almost always at the center of the attention, no matter where he plays. Recently, the talk of the town has been whether Manchester United manager Erik ten Hag has made a big mistake by keeping Cristiano at Old Trafford.

The Portuguese striker has not been able to break into the team this team. As for United, they have had a rollercoaster of a season. They lost two of their opening games in the English Premier League against Brighton and Brentford. Ronaldo was not able to make an impact on both these games. Many thought United were going to go in a crisis as the Liverpool game neared the following week.

The English club caught everyone by surprise by winning 2-1, with a goal each from Marcus Rashford and Jadon Sancho. From then on, they won three league games in a row, against Southampton, Arsenal and Leicester, making it four consecutive triumphs. Although things looked like they were getting better for Man Utd, it wasn’t the case for Ronaldo.

CR7 did not start any of the four games that United won. In addition to that, he had no goal contributions during that period. This prompted fans and pundits to ponder whether they were better off without the 5x UCL winner.

To make things worse, Ronaldo did not have his best night when he finally made a start against Spanish club Real Sociedad in the UEFA Europa League. He could not get on the scoresheet, after having a goal disallowed for offside. Manchester United lost 0-1 at home that night.

Cristiano Ronaldo scores his first goal of the season 🔴 pic.twitter.com/OwjtjpmVgj

The next UEL game for United was against FC Sheriff. Although they looked like a unified team after beating Real Madrid in the past, it seemed like MU could get the job done. It was indeed a solid performance from them as they won 2-0 away. Ronaldo scored the first goal of his season, bringing his total club-career goals to 699 with Sancho also netting one.

After the game, ten Hag spoke to Sky Sports about Ronaldo’s goal. He said, “Ronaldo needed that goal. Many times he came close but he wanted that so much.” As the Dutch manager said, Cristiano came close to finding the net with the clear cut chances he got. For him to finally get the goal will mean that his confidence will be high for the upcoming games.