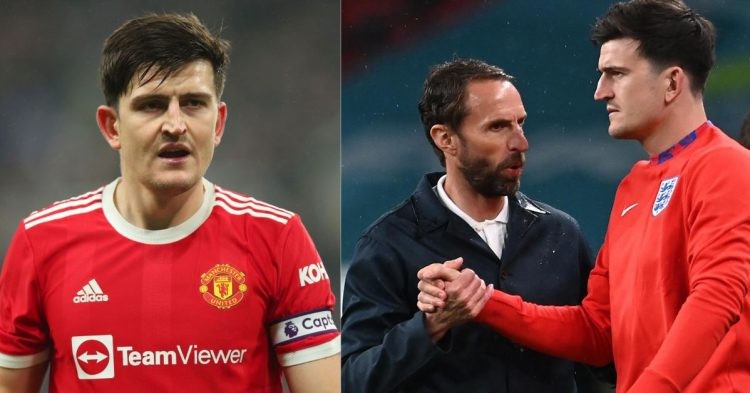 The English boss Gareth Southgate has elucidated he wishes Harry Maguire will get more game time at Manchester United. He thinks that it’s beneficial for him to play For United regularly ahead of the World Cup.

The defender started the game for the Three lions in their 3-3 draw with Germany. He was heavily criticized for giving away a penalty, early in the 2nd half.

Harry Maguire has not started a league game since United’s 4-0 defeat against Brentford. It was the 2nd game of the season for United. The United boss prefers the partnership of Lisandro Martinez and Raphael Varane.

Therefore, it came as a shock to many fans when the United man was called up for and subsequently played in both of England’s Nation League games this month.

But with hectic schedule in October, Ten Hag will likely need to rotate his team in the coming weeks. Gareth Southgate has now sent a message to the United manager about Harry Maguire’s role in the side.

Further he added, “Why do we pick him? Because he’s one of the players who gives us the best chance of winning. So really we should all be wanting a Harry Maguire that’s playing regularly and playing with confidence. That applies to quite a few players but he’s the one everything lands on, which must be a tough space for him.”

When asked about sticking with his trusted players, Southgate said: “That’s always going to be a challenge, especially regarding how much football they’ve had. I know everyone will focus on Harry, but there were some very important moments Harry delivered during the two matches.”

United’s next match is the Manchester derby. So it is unlikely that Ten Hag will deviate from his preferred partnership of Varane and Martinez.

But with two Europa League fixtures against Omonia Nicosia either side of a trip to Everton to come. We can see, there could be an opportunity for Maguire to try and play his way back into the Dutchman’s thinking.

Gareth Southgate is expected to name his 26-man squad for Qatar 2022 on October 20. Which will be well before FIFA’s deadline of Sunday November 13.

England face Iran in their opening World Cup group game on November 21.The Match will be played at the Khalifa International Stadium in Doha. It’s the same venue where Germany begin their Qatar 2022 campaign as they face Japan on November 23.