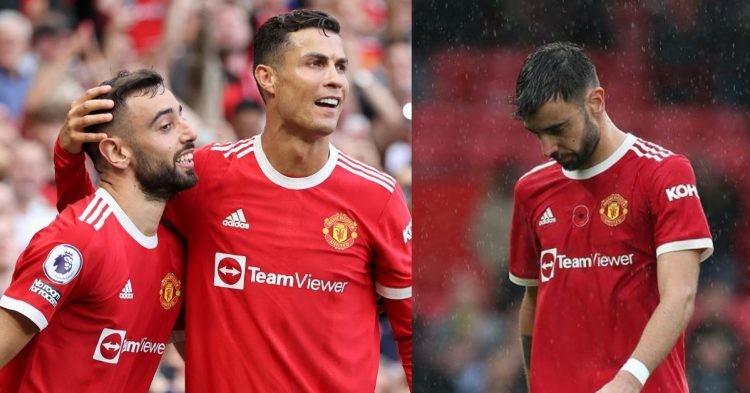 Bruno Fernandes joined Manchester United in a £47 million deal in January 2020. The Portuguese was slated for a move to Tottenham in the summer before. Sporting refused the transfer as Spurs did not match their valuation. Furious at this Fernandes pushed for a move to the Premier League in January.

He has since become one of the best players for Manchester United over the past few seasons. Despite a dazzling start to his Manchester United career, it seems the Portuguese midfielder has struggled to reach his old heights ever since Cristiano Ronaldo joined the club.

Speaking to the Athletic in an interview, Fernandes said he did not blame his club and international teammate one bit. “I just had a poor season in terms of my own numbers. I don’t think it is about Cristiano or myself.

“Before he came, I was also taking the penalties, but I had two chances to take the penalties last season, and I missed both. So, I cannot blame Cristiano for taking penalties, especially when he scores them. When I missed against Arsenal in April, it was him who gave me the ball and said, ‘Go yourself and score’.”

“I missed, but I felt that he trusted me to be the one to step up and score in the big moment. So I don’t think it is because of Cristiano; it is because I didn’t do the best in myself in some moments to get goals or assists.”

Ronaldo has scored 4/5 penalties he has taken for United since his return. Despite his amazing form from the penalty spot Fernandes took the penalties against Arsenal and Villa, in which United lost both games. Since these misses, Fernandes has completely given up the penalty duties to Ronaldo.

Is there any truth behind Cristiano Ronaldo being responsible for Bruno’s form?

Cristiano Ronaldo rejoined Manchester United in the summer of 2021 and has scored 18 goals in 36 appearances so far. Before Ronaldo joined United, Fernandes made 51 appearances, scoring 36 goals and registering 18 assists.

Ever since Ronaldo joined although, it seems his form has dropped off, from his very high standards. He had a poor 2021/22 based on his previous season’s stats, scoring 10 goals and assisting 6. 2022/23 on the other hand, has been abysmal. He has scored just 1 goal and registered only 1 assist.

Ronaldo’s form seems to have fallen off a cliff as well having scored only 1 goal in the season so far.
Ronaldo’s return to Old Trafford and Fernandes’ drop in form is in all probability, nothing but a coincidence. Bruno Fernandes has played with Ronaldo for Portugal since 2017 and has never had a problem succeeding with the forward.

“In the national team, I play with him, and when I score, he is on the pitch. To play with Cristiano as a No. 10 is actually really good because players respect Cristiano so much that it creates more space, as the opponents are afraid of him taking the ball and scoring.”

Both Portuguese players seem to be struggling for form at the moment. Erik ten Hag will feel it is vital for his two talismans to return to form in an important rebuild season for Manchester United.