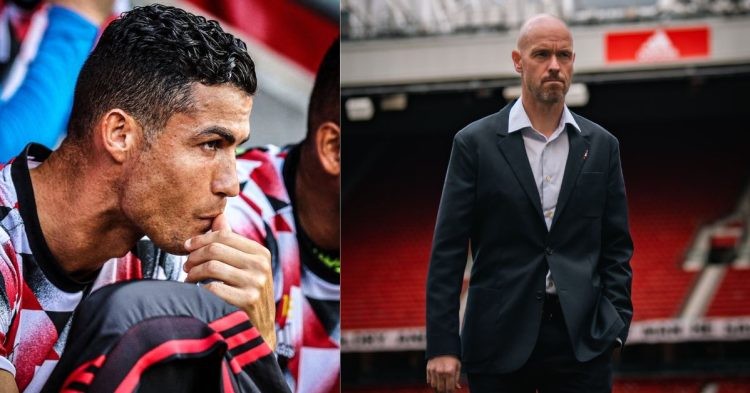 In recent times, Manchester United have looked like they were on the right path back to their glory days. In the absence of Cristiano Ronaldo, they won four Premier League games in a row. Those included wins over Arsenal and Liverpool. As they went into the Manchester Derby this weekend with a positive mindset, things did not turn out to be that way.

United manager Erik ten Hag made the decision to keep Ronaldo on the bench once again. He went for Marcus Rashford leading the line, with Jadon Sancho and Antony taking up each flank as Bruno Fernandes filled up the playmaker role. It was a bold move to keep one of the GOATs on the bench, for consecutive league games.

Many eventually criticized ten Hag’s decision more as United lost 6-3 to Manchester City at the Etihad. The common opinion among fans is that Ronaldo could have had a bigger impact than Rashford. The interesting event during the game was when CR7 was an unused substitute for the team. The manager chose to bring on Anthony Martial instead of Ronaldo and he clarified his decision.

During the post-match press conference, ten Hag mentioned, “I wouldn’t bring him in because out of respect for Cristiano, his big career. Other thing was the advantage I could bring Martial, he needs the minutes but I don’t want to point it out like that.”

🗣️ “I wouldn’t bring him out of respect for Cristiano [Ronaldo] and his career.”

Erik ten Hag on why he didn’t bring on Cristiano Ronaldo in the Manchester derby. pic.twitter.com/0qZ0ATX2Sw

The Dutch manager explained his decision to keep Ronaldo on the bench. He mentioned that it was out of respect for the 37-year-old’s illustrious career. In addition to that, Ronaldo hasn’t lost many games by a huge margin. It seems like ten Hag wanted to keep his star man stress-free on the side. Moreover, he also claimed that Martial needed the minutes.

The Frenchman had a decent preseason as he was able to get on the scoresheet for the club. However, he hasn’t been able to get off the mark this season due to injuries. But when he came on today, he instantly made an impact as Martial bagged himself a brace against Ederson.

Casemiro and Ronaldo’s reaction at the bench of Man United 😭 pic.twitter.com/pJqrrgM5En

As for Ronaldo, the future still looks uncertain. It seems like he hasn’t convinced his manager that he is still a force to be reckoned with. When City were leading, CR7 was visibly upset as he had his hands over his face, expressing his disappointment. He would only be feeling that he should have been on the pitch to help his team get the win.