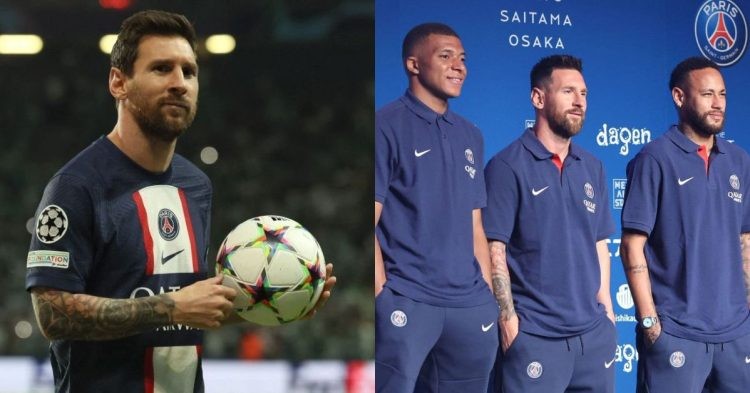 The legendary Argentine Maestro Lionel Messi shocked the world in 2021. He left Barcelona following 21 years at the Nou Camp to join Paris-Saint-Germain. Despite his sensational goal record for the Catalans, he struggled to reproduce the same numbers for the Parisians. By his standards, the Argentine, had a mediocre debut season in Paris. Messi scored just 6 times and recorded 14 assists in an underwhelming season.

However, the Argentine talisman seems to be hitting top gear at the right time with the FIFA World Cup just weeks away. Messi has been in scintillating form this season. He already has 6 goals and 8 assists in mere 11 games for PSG this season.

Lionel Messi’s goal against Lyon last week took him above Cristiano Ronaldo, as it was his 672nd goal from open play which was one ahead of the Portuguese.

Can Lionel Messi win the UEFA UCL alongside Neymar Jr and Kylian Mbappe this season?

The Argentine scored a brace against Honduras, including a sumptuous chip, to take his tally to 88 goals in 163 caps. After the match, he said he feels a lot more at home in Paris this year. PSG currently stands firm with a two-point lead at the top of Ligue1 and has registered victory in both the Champions League games.

Leo Messi on his new PSG life: “I feel good, I feel different from last year. I knew it was going to be like this”. ⭐️🇦🇷 #PSG

“I’m more comfortable with the club, the dressing room… my teammates, the game. I feel very good and so I’m starting to enjoy myself again”. pic.twitter.com/Y1bArtgO3S

According to Fabrizio Romano, Messi said, “I feel good, different from last year and I knew it was going to be like that. Last year, as I’ve already said, I had a bad time, I never finished finding myself but this year is different.”

When comparing his feelings from last season and now, Leo said, “I’ve arrived with a different head, more accommodated to the club, to the dressing room, to the game, to my teammates. The truth is I feel very good and I’m enjoying myself again.”

Lionel Messi is feeling back to himself 🌟 pic.twitter.com/6kMV4zbtzn

As the nation’s focus switches to the FIFA World Cup in November, the South American and his side in Group C will face Poland, Saudi Arabia, and Mexico. Messi is likely to be back on the field for Argentina in Wednesday’s friendly against Jamaica. This would be his last match for the national team, before heading to Qatar in November.