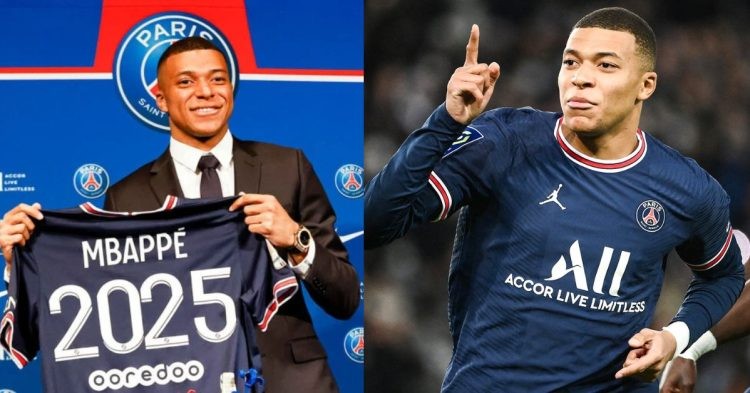 The Kylian Mbappe transfer saga was one of the most followed in recent years. The French forward decided to extend his stay at PSG for another 3 years, snubbing Real Madrid in the process. His decision to stay at PSG not only infuriated not only Real Madrid supporters but also the wider football community.

This was because everyone thought he only stayed at the French giants for monetary reasons, something footballers like Oscar, Iniesta, and many more have done for ages.

Mbappe has made 149 appearances for PSG scoring, scoring an amazing 126 goals. His time in the French capital has seen him become one of the world’s best and most sought-after players. He has said that his decision to stay at PSG was purely a sporting one.

How much does Kylian Mbappé earn at PSG?

According to the New York Times, will be paid $250 million for the three seasons he has signed on for, approximately 83 million dollars per season. He has also bagged a reported $125 million as a signing-on fee. He is said to have a say in the managerial role, and who the club signs as well. This is an unprecedented situation in the history of any major sporting league.

As one of the richest footballers on the planet, his net worth is said to be around $95 million as of 2021. Mbappe has maintained that he only stayed at PSG for sporting reasons. Speaking about his decision to stay, he said, “Because wherever I go, I’m going to get money, I’m this type of player everywhere I go.”

He also said that the French President played a role in keeping him in France and snubbing Spain. “I never imagined I was going to talk with the president about my future, in my career, so it’s something crazy, really something crazy.

He told me ‘I want you to stay, I don’t want you to leave now as you are so important to the country’. He said ‘You have time to leave, you can stay a little bit more’. Of course, when the president says that to you, that counts.”

There were split reactions to Mbappé signing his contract extension at PSG. Many fans gave him hate, claiming he chose money over glory.

Mbappe stays at psg for the love of the shirt ♥️👏 pic.twitter.com/ZMsqmjnNTK

While some thought it was all money related, others argued if there was actually some merit in his argument. Moreover, many argued that it was after all, a footballing decision.

Literally nothing that Madrid can give that he can’t get at PSG.

Money? He’d make more at PSG
Trophies? He’d win more at PSG
The UCL? He stands equal or dare I say better chances of winning it at PSG.
Numbers? Lol
Legacy? Could go on to be the greatest in PSG’s x France history

The extension seems to have started a small rivalry between PSG and Madrid fans. Real Madrid fans are still furious with Mbappe but are obviously satisfied with the amazing squad Carlo Ancelotti has built.

Fans always have reactions to new signings and contract extensions. But a player touted to become one of the best this world has ever seen, snubbing one of, if not the biggest club in the world seems to have shocked football fans all over the world.

Did Kylian Mbappe make the right decision to stay at PSG?

Despite the huge salary and signing-on fee, there might be some truth to his statements. PSG’s start to this campaign has been nothing short of phenomenal. Christophe Galtier seems to be the first manager who PSG has appointed, that wasn’t a superstar.

He has simply been appointed to make PSG play better football and become successful in Europe as well. They have scored 26 and conceded just 4 under Galtier domestically.

At PSG, Mbappé has a certain starting position alongside Messi and Neymar as a center-forward. At Real, on the other hand, that position has been filled by Ballon d’Or favourite Karim Benzema. He also might not play on the left, with Vinicius Junior currently in the form of his life.

On paper, PSG has a much better squad than Real. The only thing lacking in the team seems to be discipline and the mentality to turn up on the biggest stages of the game. PSG does compete in the Champions League every year, and this may play some part in building up that mentality to have what it takes to win.

Hence, despite the hundreds of millions of dollars he has received to stay at PSG, his decision might be one fueled by both money, and desire to win, but while in France.