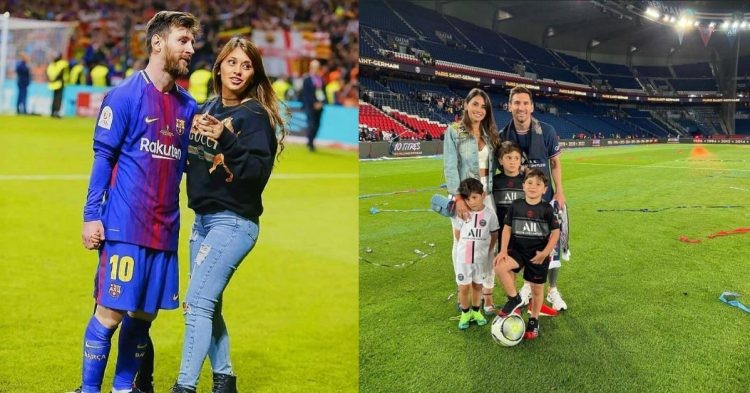 It is common knowledge that Lionel Messi is one of the greatest football players ever. We can argue that only Cristiano Ronaldo might be on par with the Barcelona legend. Messi’s achievements will be spoken about even after centuries, because of how extraordinary they are.

Messi has won 7 Ballon d’Ors, 4 UEFA Champions Leagues, a Copa America for Argentina, and many more honorable accolades. He enjoyed the most successful part of his career with Barcelona. Till now, Messi has scored 773 goals for club and country. As he often claims, Leo owes his success to his beautiful family.

Antonela Roccuzzo is currently a model and businesswoman. But before the spotlight arrived, she was just like the rest of us. She is from Rosario, which is the PSG forward’s hometown too. The pair met at a young age, through Messi’s friend, Lucas Scaglia, who was also Antonela’s cousin.

According to reports, Messi often used to visit his friend hoping to see his now-wife. It is said that they kept each other’s contacts even after Leo left Argentina to play for the La Masia in Spain. Although, we do not know when the pair started dating, but Messi confirmed his relationship during his early career when was playing for Barcelona.

Messi married Antonela in 2017 in their hometown, Rosario where they met for the first time. The ceremony was held in a hotel where they were many other football stars present as well. The list included Neymar Jr, Luis Suarez, and Gerard Pique, who attended the wedding with global icon Shakira.

Roccuzzo has also made a name for herself as a businesswoman. In 2017, she opened a Sarkany store in Barcelona together with Sofia Balbi, who is Messi’s best friend, Suarez’s wife. Sarkany is an Argentinian footwear brand and the ladies’ store was the first of its kind in Europe.

Messi has three kids with Antonela; Thiago, Mateo, and Ciro

Throughout his career, Messi has had only one girlfriend, which is now is his wife. The couple have welcomed three children into the world over the years. They have three sons, Thiago(9), Mateo(6), and Ciro(4). The Argentinian forward has often posted images of his sons on his Instagram.

One of the most popular videos of the Messis would be when his wife told him to let them win. Messi was playing football with his sons in what seemed like his backyard. Messi being the competitive player he is, did not give any chance to his sons and went all in.

Leo’s son, Mateo, has caught the headlines before. In the past, Messi revealed that his boy likes to take the mick out of his father. “But the last time we were playing Play Station, he told me: ‘I’ll choose Liverpool, the ones that defeated you,” Messi told TyC Sports. In 2019, the 5x golden boot winner endured a game to forget against Liverpool, who came back from 3-0 to win 4-0 on aggregate. They went on to win the UCL eventually that year.

“He watches television and celebrates Real Madrid’s goals to irritate Thiago, he is the one who is a Madrid fan”, Leo also mentioned. His former team, Barca and Real Madrid are two of the biggest clubs in football history. Moreover, the teams have formed a fierce rivalry and their El Clasico is one that the entire world stops to watch.